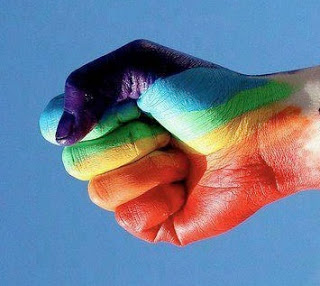 At least 28 people were arrested for battery in the area of Sunday’s Chicago Gay Pride Parade. The arrestees represent just a fraction of the individuals who took part in more than 60 batteries throughout the day and night.

A list of batteries and fights reported to 911 by citizens or witnessed by police near the 2013 Chicago Gay Pride Parade route:

Sunday 30 June 2013
1:36PM: Wellington and Broadway. Victim declined police services.
1:51PM: Battery in the iHop parking lot at Halsted and Broadway.
2:01PM: Battery offenders resisting police at Newport at Halsted.
2:14PM: Battery in progress at the “Punkin’ Donuts” on Clark at Belmont.
2:17PM: Battery victim needs an ambulance at 3042 N. Broadway. No arrest.
2:21PM: Officers witness a battery at Clark and Barry. Offender arrested.
2:27PM: Additional units called to handle a fight behind the Subway restaurant at 2938 N. Broadway.
2:32PM: One arrest for fighting at 600 W. Diversey.
2:34PM: A fight at Broadway and Sheridan dispersed when officers arrived.
2:38PM: Fight in the alley behind 3138 N. Broadway at Briar.
2:47PM: One person beaten badly in a 10-person brawl at 3726 N. Broadway. Ambulance requested.
3:00PM: Fight at Roscoe and Halsted.
3:03PM: Customer threatening the manager of “Punkin’ Donuts.”
3:09PM: Battery victim at Halsted and Broadway. Offender was male, Hispanic, 5’8″ tall, wearing shorts and no shirt.
3:11PM: Domestic battery at Broadway and Belmont
3:19PM: Three arrests for battery at Belmont and Sheffield.
3:20PM: One arrest for battery at Clark and Halsted.
3:26PM: A woman called police from the 7-Eleven at Roscoe and Halsted to report that a male, white, with heavy tattoos, short brown hair, and navy blue shorts punched her.
3:29PM: Battery at Roscoe and Halsted results in 2 arrests.
4:00PM: Officers witnessed a battery at Cornelia and Elaine Place. One arrest. Case #HW342145.
4:00PM: A 911 caller said he went to the wrong party and was attacked by the people inside.
4:24PM: A resident who lives near Barry and Broadway reports that 10 people she doesn’t know came into her apartment, beat her up, and now they’re standing outside laughing about it.
4:31PM: Three girls fighting outside Jamba Juice, 920 W. Belmont
4:35PM: A woman in a car at Hawthorne and Lake Shore Drive is beating someone in the back seat.
4:37PM: Alderman Tom Tunney reports 3 girls fighting next door to his restaurant at 913 W. Belmont.
4:36PM: Commander of the 19th district says he has received reports of a huge crowd at Belmont; fights breaking out in the station.
5:06PM: CTA reports a fight on a southbound Brown Line train at Wellington. Officers remove one “aggressor” at Wellington.
5:35PM: Battery arrest at Belmont and Halsted.
5:40PM: A group was reported fighting inside the City Suites Hotel 933 W. Belmont.
5:59PM: Big fight in progress outside of Taboo-Tabou, 854 W. Belmont.
6:56PM: One arrest at Halsted and Roscoe for assault.
6:58PM: Domestic on Halsted north of Waveland. A Hispanic woman is beating a man with a stick.
7:36PM: Four arrested for battery outside of Starbucks at Clark and Belmont.
7:49PM: Eat A Pita, 3155 N. Halsted, reported that 3 females were beating the restaurant’s manager with sticks in the alley. The offenders were gone when police arrived.
8:13PM: Police witness a battery in progress outside Las Mananitas Mexican restaurant at Halsted and Brompton. One arrest.
8:21PM: A “huge gang fight with bats” and other weapons is reported in the 900 block of Roscoe, between Halsted and Clark.
8:21PM: “Huge fight” in the street at Halsted and Melrose. Crowd dispersed.
8:29PM: Woman being attacked on the corner of Clark and Belmont.
8:33PM: Another disturbance at Halsted and Melrose. “Large group of gang members fighting” on Melrose.
8:48PM: Battery in progress the Clark and Belmont “Punkin’ Donuts.”
8:50PM: Beating victim down and bleeding on Clark Street across from the bank at Belmont.
9:31PM: Battery in progress, 807 W Buckingham west of Halsted.
9:42PM: Five arrested for fighting at Halsted and Roscoe.
9:56PM: A fight inside the 7-Eleven on Sheffield near Wrigley Field.
10:08PM: One female arrested for battery at 856 W. Belmont.
10:31PM: Two men fighting in the vestibule of Chase Bank, 3500 N. Clark Street.
10:41PM: 10 people fighting by the Walgreens at Clark and Barry.
10:55PM: An officer calls for 4 back up units to handle a fight at Halsted and Roscoe. One arrest under case #HW342677.
11:09PM: Two arrested for battery at the “Punkin’ Donuts” on Clark at Belmont.
11:19PM: Two arrested at Halsted and Roscoe.
11:30PM: Officers call for an ambulance at Addison and Halsted to treat “someone who just got beat up.”
11:57PM: Big fight next to the 7-Eleven on Roscoe at Halsted.

Monday, 1 July 2013
12:34AM: An offender, described only as a black male, is pepper spraying people one block west of the police station on Addison at Wilton.
1:09AM: Big fight at Belmont and Sheffield.
1:17AM: A woman and three men fighting with bottles in the intersection at Halsted and Waveland.
1:17AM: A woman was attacked in a bathroom at Circuit nightclub, 3641 N. Halsted.
1:30AM: Another battery at Circuit. Security is holding the offender.
1:33AM: A mob fighting in the street on Aldine between Halsted and Clark.
1:35AM: Circuit nightclub reports they now have two offenders handcuffed and one restrained. Police prepare to enter the club in force.
2:00AM: Illinois Masonic Medical Center has two battery victims who need to file police reports.
3:25AM: People fighting in the 3400 block of N. Halsted.
4:12AM: Ambulance needed for two persons injured in a domestic battery at Halsted and Cornelia. Both were treated at Thorek Hospital. Chicago Police Department case#HW342847