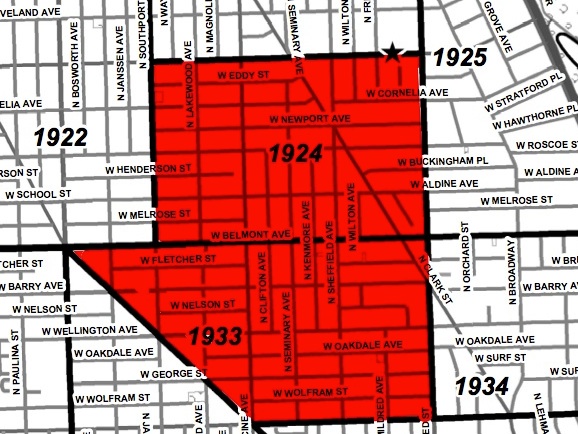 Wow. Two quiet nights in a row? How refreshing. It was so slow, we had time to put together a few thoughts for tonight’s CAPS meeting for beats 1924 and 1933.  Everyone is welcome tonight, even if they don’t live in the specified area.

The meeting will be at Illinois Masonic Medical Center, 836 W. Wellington, at 7PM.  The meeting is usually held in the Olson Auditorium. The front desk will point you in the right direction and signs should be posted.

Now…On with our notes…

Robberies Are Way Up on Beat 1924
– Beat 1924 had 6 robberies in May. It had SIXTEEN in June. The count of 16 does not include the one that ended with a mob attacking and stabbing the victims with broken bottles. That incident is classified as an (1) aggravated battery with a knife or cutting instrument*

Robberies have been going UP overall in the neighborhood for years.  Why? What’s being done? What measurable decrease should we citizens expect to see over the next 3, 6, and 12 months?

Wildings
There were at least four cases of lone victims being attacked by large groups of offenders on beat 1924 in June. Surely five or 10 people aren’t beating one guy up just to get a small percentage of the profit from a cell phone theft. What is the motive behind these wildings?

A list of neighborhood wildings is maintained on CWB.

The 19th District has lost 20% of our police officers since March of last year
The 19th district is grossly understaffed. Ask how many officers the 19th district had in March of last year. Ask how many it has today. The CPD will almost certainly claim that they cannot reveal strategic operational data. So, we’ll tell you. There were 372 392 officers in the 19th district on March 4, 2012. There are 300 today. Of course, they will say that our information is wrong, but they won’t provide the data to prove it. It’s a classic “trust us, we’re the police” CAPS move. Our numbers are correct.

Periods of time when no police are available.
Those two young men who were stabbed with bottles called 911 to report that they were detaining two cell phone thieves. No police officers were available, so they were waiting for cops who were never on the way. 1) were the victims told that no cops are on the way so they would know to back out of a dangerous situation? Why not? 2) Why does our district run out of police officers? 3) What specific steps are being taken to rectify that problem and ensure that when citizens call for help, they get it?

What is being done to maintain control on Belmont Avenue overnight?
How should citizens measure the police department’s success or failure in this effort?

Insist on answers. If they don’t have answers, ask why. Demand that they bring the answers next month. Be there next month to follow up.

And, most of all, don’t trust a CAPS officer. They are public relations professionals who are there to get you in and out with no muss and no fuss. They are NOT interested in being held responsible or having their information questioned.

Oh, if Tom Tunney is there, everything we just said applies…thrice!
——————————————————————————————————–
* Crime events only receive one classification in Chicago, so if you are robbed and stabbed, the stat will only be officially recorded as a stabbing and it will not count as a robbery. Remember! Crime is down, people!