Ru·bi·con  [ˈruːbɪkən] n. A limit that when passed or exceeded permits of no return and typically results in irrevocable commitment.

The reported strong-arm robbery of a patron inside of a Halsted Street bar was just one of four robberies reported in Boystown this morning.

Offenders responsible for two of the attacks are believed to be in custody, thanks to the brave work and hustle of our  district’s police officers.
In addition to the four Boystown robberies, a woman had her purse snatched near Wrigley Field.
Incredibly, yet predictably for those who know our neighborhood, all five crimes played out in under two hours. 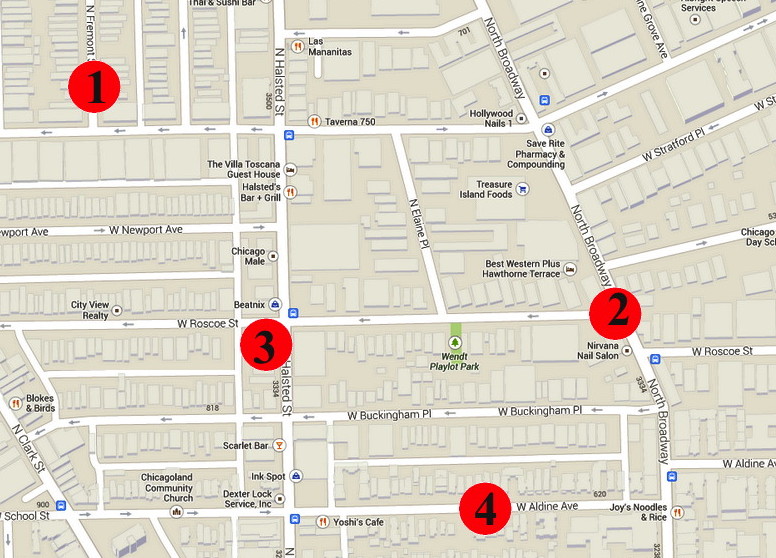 Robbery 1 – 12:58AM
The first robbery of the morning came at 12:58 from the 3500 block of N. Fremont Street. A witness reported seeing two offenders, described only as male and black, beating a man on the ground. The caller said he could hear the victim screaming.
The first officer on scene caught up with and detained at least one offender  on Cornelia Avenue, a short distance west of Halsted Street. Another suspect was taken into custody after officers apparently spotted him outside of Berlin nightclub, 954 W. Belmont.
A Samsung Galaxy cell phone was taken in the strong arm robbery, which is recorded under case #HW411123.
Robbery 2 – 1:37AM
A witness reported seeing a victim get struck, knocked to the ground, and robbed of his cell phone and debit card at Roscoe and Broadway. An officer was on-scene less than one minute after the call was dispatched.
The offenders were described as two males, black, both about 6-feet tall, with long braided hair. One wore a baseball cap and tan shorts, the other wore a hoodie or basketball warm-up jacket and shorts. They fled westbound on Roscoe toward Halsted street after the attack.
At 1:43AM, the first officer on scene made a remarkable announcement: “[The] victim just decided he’d rather get out of the [police] car and go drinking with a buddy he spotted. Disregard.”
Since the victim decided to go drinking, no report was immediately filed. Fortunately, the police officer who tried to help him did not give up.
A half hour after the victim went drinking, the officer spotted two men who strongly matched the robbery suspect descriptions walking eastbound in the 800 block of Roscoe toward Halsted Street. Additional officers conducted a street stop on Roscoe, across the street from Roscoe’s Tavern. Both men were taken into custody. As of August 27, 2013, no report has been filed.
Robbery 3 – 1:40AM
According to an officer on the scene, a victim was beaten and robbed inside of Roscoe’s Tavern. The officer had been handling a disturbance near D.S. Tequila Company, 3352 N. Halsted, when he told dispatchers that he had a second matter to attend to: A strong arm robbery.

The officer explicitly stated that the attack occurred inside of Roscoe’s Tavern, which is located at 3356 N. Halsted Street.

An ambulance transported the victim to Illinois Masonic Medical Center for treatment of injuries suffered during the attack.

Purse Snatch – 2:24AM
A woman’s purse was snatched in an alley behind the 7-Eleven store on Sheffield Avenue, across from Wrigley Field. The suspect is described as male, black, about 6’3″ tall, 180 to 200 pounds, wearing a gray hoodie and dark jeans. Case #HW411176
Robbery 4 – 2:41AM
911 dispatch received a call of a woman screaming for help on Aldine Avenue between Broadway and Halsted. Moments later, the woman borrowed a passer-by’s cell phone to call 911 herself. She reported that she had been pushed to the ground and robbed of her cell phone by a 25-year old male, black with corn rows who was wearing a black hoodie.
The first officer on scene was unable to locate the victim, so 911 operators called the owner of the cell phone that she used to report the attack. The Good Samaritan gave a full description of the victim and said she was last seen walking eastbound toward the lake.
It is not clear if police made contact with her. As of August 27, 2013, no report has been filed.

EDITORS’ NOTE August 17, 2013 11AM:
A reader emailed us to ask why we removed the leading photo of the Roscoe’s entrance and the word “Roscoe’s” from this story’s headline. It’s a fair question and we genuinely appreciate the reader’s willingness to ask us a potentially tough question.

To put minds at ease, no, we have not been asked by any outside entity to change or downplay the presence of Roscoe’s in this story. As we are apt to say, “It don’t work like that.”

Our practice at CWB is to double check our work. In this case, review found that the address given by the officer once and confirmed by the dispatcher twice was 3352 N. Halsted. That is the address of D.S. Tequila Company. The officer says the robbery happened inside of Roscoe’s Tavern, but he never corrected the dispatcher when she said 3352 vs.the Roscoe’s address of 3356. It’s a relatively minor point and probably wasn’t even worth correcting in the officer’s mind.

This seemingly small discrepancy is also the reason that the story itself is constructed as it is. We strive to be as clear and accurate as we can in our reports.

So, rest assured, we’re not pulling any punches. We simply felt that it would be better to proceed with exactly what we know rather than rounding off the edges.