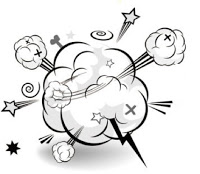 Several callers reported a crowd of 15 spectators watching a 5-person fistfight on the corner of Halsted and Buckingham at 12:15 this morning.

Officers arrived quickly, but the fight was over when they rolled up. A victim who had been punched in the face remained on-scene. They searched the area with the victim in an effort to find the offender, described as male, black, 6’2″, wearing a white hat, white shirt, and white shorts.

The man was found and taken into custody at 1:40AM outside of Sinbad’s restaurant, 921 W. Belmont, near the Red Line station.

UPDATE 4 MARCH 2014: The criminal case was dropped after the victim failed to appear in court.