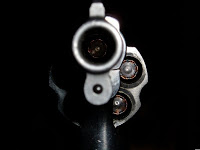 A motorist called 911 at 4:50 this morning after someone put the undesirable end of a 22-caliber handgun in his face at Halsted and Belmont.

The gunman, a black male wearing glasses and black shirt with white shorts, was last seen walking westbound toward the Belmont L station.

As officers spoke with the caller at Belmont, one of the officers saw a man matching the gunman’s description approach the intersection. That man was stopped, searched, and taken into custody at 4:59AM.