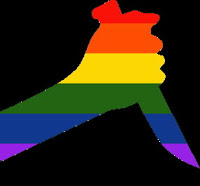 A male victim was stabbed in the hand during a robbery in Boystown Monday evening. Police and Fire responded to 3352 N. Halsted, the address of D.S. Tequlila Company, at 9:45PM.

The offender, who was last seen running westbound on Roscoe Street, is described as a male, black, about 30 years old, 5’8″ tall, 180 pounds with a muscular build, wearing a long sleeve navy blue shirt that had a white logo on the left side of the chest. He had a shaved head and goatee.

The victim was taken to Illinois Masonic Medical Center for treatment.