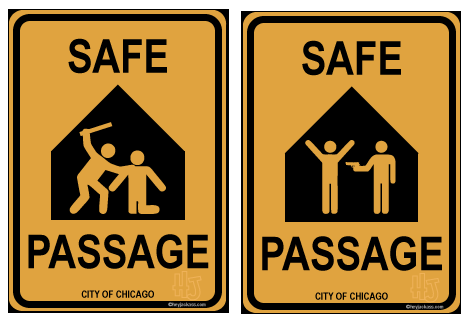 W.H.Thompson over at HeyJackass.com put together a couple of “Safe Passage” sign ideas just for us.

It would be nice to have no-robbery/no-beating streets declared around here. But, given the “success” of the original program, maybe we’ll just risk it….

Monday evening’s quintuple shooting in Uptown was smack in the middle of a “Safe Passage” zone. Just over a week before that, a man was shot dead, seemingly underneath the “Safe Passage” sign itself (below).