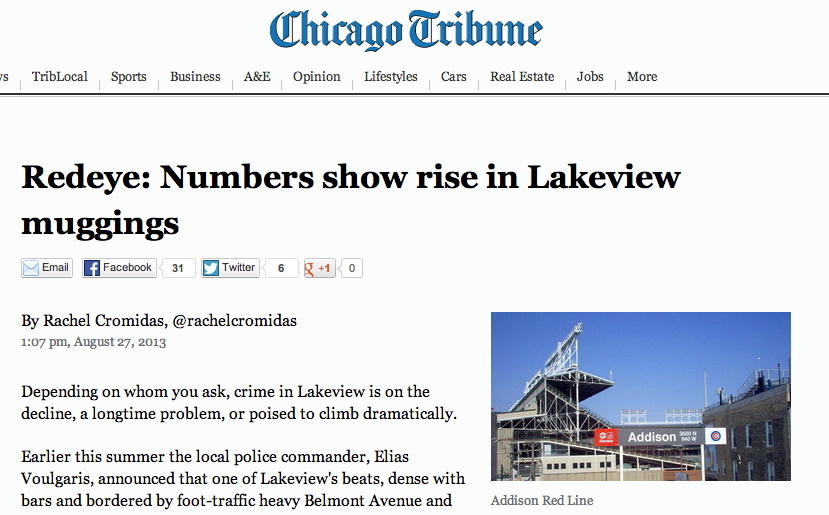 Welcome aboard, Chicago Tribune and Redeye.  The mother-daughter of Chicago print news runs the story this afternoon.

A RedEye analysis of the city’s crime data shows that reported summertime muggings have been slowly climbing over recent years, from about 300 thefts and robberies reported in 2008 to more than 450 this year.

Not all incidents are included in the data, however, because some were accompanied by more severe offenses. But this summer’s numbers provide a sketch of the area’s crime hotspots at a time when many community members are clamoring for more information from the police department and other community leaders on anti-crime efforts.

The opening of the second paragraph is something we don’t mention here very often. If a person gets terribly stabbed and robbed, the incident will only be recorded as a stabbing (aggravated battery) in the city’s publicly-available data. The robbery portion does not show up in the city’s online stats.  Here’s an excellent example of that.
It’s good to have the Trib and Redeye‘s analysis out there.  We may quibble with some things (The commander “announced” that beat 1924 is #1 in robberies? We’d say he “confessed.”) but, all in all, this is an important step toward getting past the denials and on to the solutions.
About CWBChicago 4363 Articles
CWBChicago was created in 2013 by five residents of Wrigleyville and Boystown who had grown disheartened with inaccurate information that was being provided at local Community Policing (CAPS) meetings. Our coverage area has expanded since then to cover Lincoln Park, River North, The Loop, Uptown, and other North Side Areas. But our mission remains unchanged: To provide original public safety reporting with better context and greater detail than mainstream media outlets.
Website Facebook Twitter YouTube