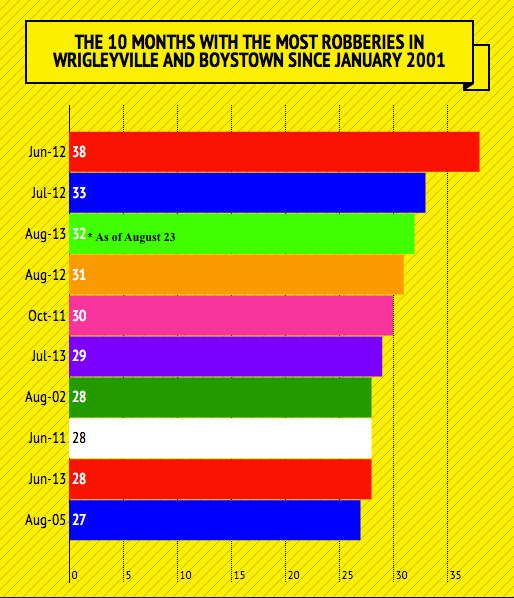 August 2013 may go on-record as the single worst month for robberies in Wrigleyville and Boystown in at least 13 years.
As of August 23, the neighborhood had racked up 32 robberies for the month, six shy of the record 38 robberies reported in June of last year.
Considering the mayhem that swept through the area last Friday night into Saturday morning is not included in the data set and another weekend is still about to begin, the smart money is on August 2013 taking the top spot.
The source for our graphic is the City of Chicago Data Portal, which catalogues every crime reported to Chicago police since January 1, 2001.
About CWBChicago 4360 Articles
CWBChicago was created in 2013 by five residents of Wrigleyville and Boystown who had grown disheartened with inaccurate information that was being provided at local Community Policing (CAPS) meetings. Our coverage area has expanded since then to cover Lincoln Park, River North, The Loop, Uptown, and other North Side Areas. But our mission remains unchanged: To provide original public safety reporting with better context and greater detail than mainstream media outlets.
Website Facebook Twitter YouTube