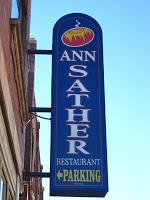 DNAInfo.com has confirmed an earlier report from area businessman Mark Thomas that a woman was pepper sprayed in an attempted robbery outside of Alderman Tom Tunney’s flagship Ann Sather Restaurant, 909 W. Belmont, around 9:45 this morning. CPD case #HW436991.

Full details are available at DNAInfo.

The robbery attempt was also the #2 story on ABC7 news Wednesday night at 10pm.

It’s good to see coverage of this problem hitting the mainstream.