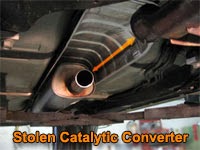 UPDATE 2 OCTOBER 2013: CBS2Chicago
has more information on the thief and the CPD’s months-long search for him and his partner.

Officers conducting a routine street stop found something fishy in the alley behind 3200 N. Racine around 6:30 this morning: A man with a saw and six catalytic converters.

“Oh my,” a dispatcher deadpanned, “That doesn’t look so good.”

The man was taken into custody for investigation while officers research reports of catalytic converter thefts in the neighborhood.

Replacement of a stolen catalytic converter can cost $1,800 according to CBS2Chicago.

Image: Hubbard Township (OH) Police Department
About CWBChicago 4360 Articles
CWBChicago was created in 2013 by five residents of Wrigleyville and Boystown who had grown disheartened with inaccurate information that was being provided at local Community Policing (CAPS) meetings. Our coverage area has expanded since then to cover Lincoln Park, River North, The Loop, Uptown, and other North Side Areas. But our mission remains unchanged: To provide original public safety reporting with better context and greater detail than mainstream media outlets.
Website Facebook Twitter YouTube