The monthly CAPS meetings start popping up this week and CWB thought we’d pass along some info to help you form questions and follow-up questions for the people in the front of the rooms.

Manpower Shortage
Here’s some documentation to help you determine if the 19th district has lost officers since the old 19th and 23rd districts merged on March 4 of last year. 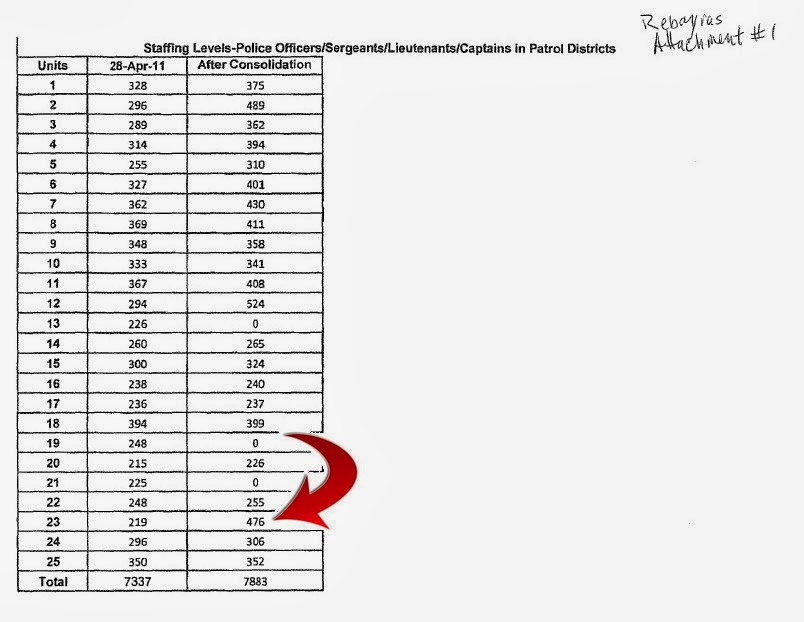 This is a page from Chicago Police Superintendent Garry McCarthy’s written responses to questions from aldermen during the 2011 city budget process.

In this page, McCarthy states that

• Before the merger, the 19th district and 23rd district had a combined total of 467 officers, sergeants, lieutenants, and captains assigned to them.

• After the merger, he said, the combined districts would have 476 officers, sergeants, lieutenants, and captains. An increase of nine. (Note: In the graphic above, the 476 appears next to the 23rd district while the 19th district shows a zero.)

So, the question is quite simple. How many officers, sergeants, lieutenants, and captains are in the 19th district today?

At last month’s CAPS meeting for beats 1924, 1925, and 1934, four different residents reportedly asked if we have more or fewer officers than before the merger. They got nothing but smoke in response. Police Capt. Mike Ryan even stated he didn’t know how many officers worked in the district these days. Oy vey. However, he did offer to get that information.

The police leadership and alderman really can’t claim that this is confidential information or critical to operations or some other Top Secret NSA/CIA/FBI gibberish.  The city itself released the same information two years ago.

May we suggest sending a pre-meeting email to the district commander and also to the CAPS office to ensure that they bring current comparable manpower info with them to this Wednesday’s 7pm meeting?

The good news is that the meeting is in the police station. If they “forget” to bring the information, they can just walk to their office while the audience waits. And you’d be more than happy to wait, wouldn’t you?

What Were We Promised? What Did We Get?
Skyline newspapers summarized McCarthy’s promises for the soon-to-be-merged districts in November 2011:

McCarthy said there would be no drawdown of beat officers between the 19th and 23rd district areas, adding that only about eight administrative and non-street positions would be cut at the merged station.

McCarthy added that he was opposed to reallocating beat officers to areas of higher crime — a contentious topic in the North Side districts, were incidents of crime have dropped to some of the city’s lowest levels over the past decade.

“I’m not willing to push down on a balloon,” he said. “I don’t want to push down here and have it pop up here. So our commitment is to keeping the cops where they are.”

As for the “no drawdown of beat officers between the 19th and 23rd district areas,” we would offer these maps.

On the left are the old 19th and 23rd districts. On the right is the “new” merged district. The new district has 15 beats. The old districts had a total of 18 beats. Same boundaries. Three fewer beats. So, right there you have an elimination of officers on the street.

You may also want to look at this pre-merger list of unicorns and rainbows on Alderman Tom Tunney’s web site.  Among the great things we were told to expect were:

•  More police officers on the street

•  …additional officers being deployed for field duty, [so] district commanders will be able to mobilize additional vehicles.

•  More officers available for assignment will result in additional vehicles at the district commander’s discretion.

Instead, we’ve received Top-10 rankings for robberies and violent crime. Far from having more police on the streets, we now live in a district that operates with 33% of its beats unprotected on busy nights..

Don’t expect the superintendent’s promises about reallocating beat officers to areas of higher crime or “commitment…to keeping the cops where they are” to stand up to scrutiny, either.

Officers Working Alone
In addition to taking police cars out of service due to a lack of manpower, the 19th district also assigns officers on all shifts, including overnights and evenings, to work the streets without partners. 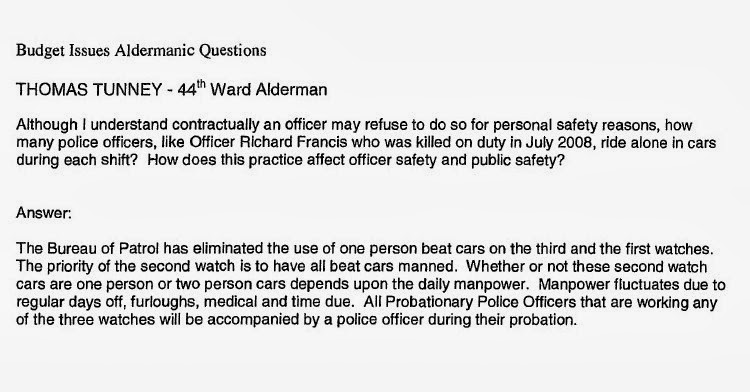 The safety of our officers is paramount. They need to have partners, particularly after dark

From a practical standpoint, having officers ride alone actually ties up more of the police resources that we do have. Why? Because when a solo officer picks up a potentially dangerous call, such as a domestic, dispatch sends a second car as back-up. That means two units are tied up instead of one.

According to McCarthy’s response to Alderman Tom Tunney’s question about officers working solo, the department “has eliminated the use of one person beat cars on the [evening] and [overnight] watches.”

Does the 19th district have officers working alone in beat cars on the evening and overnight shifts?  Yes. Why?

Full Report
You can read Supt. McCarthy’s full response to all of the aldermen’s 2011 budget process questions online.

It’s interesting to note that Ald. Tunney had a pretty long list of questions. It’s too bad he’s not holding the superintendent responsible for straying from the stats and promises he was given.