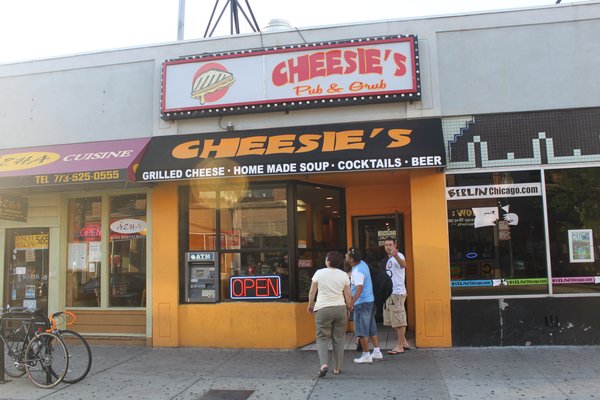 3:10PM Thursday, September 5
A 911 caller reported that the aforementioned one-armed homeless man was refusing to leave the parking lot behind 958 W. Belmont. The man was not cooperative this time and officers took him into custody for trespassing. Case #HW438879.

10:54PM Thursday, September 5
Cheesie’s Pub & Grill called 911 because a one-armed man who is not allowed on the premises had returned. The gentleman involved in these matters is said to go by the name “Babalu.”

4:50AM Friday, September 6
In matter involving a different man, officers made contact with “PD” near Belmont and Wilton. A records check indicates that California has a full extradition warrant out on PD for a drug charge. PD was taken into custody while officers sort through the warrant matter.

Image: Yelp
About CWBChicago 4360 Articles
CWBChicago was created in 2013 by five residents of Wrigleyville and Boystown who had grown disheartened with inaccurate information that was being provided at local Community Policing (CAPS) meetings. Our coverage area has expanded since then to cover Lincoln Park, River North, The Loop, Uptown, and other North Side Areas. But our mission remains unchanged: To provide original public safety reporting with better context and greater detail than mainstream media outlets.
Website Facebook Twitter YouTube