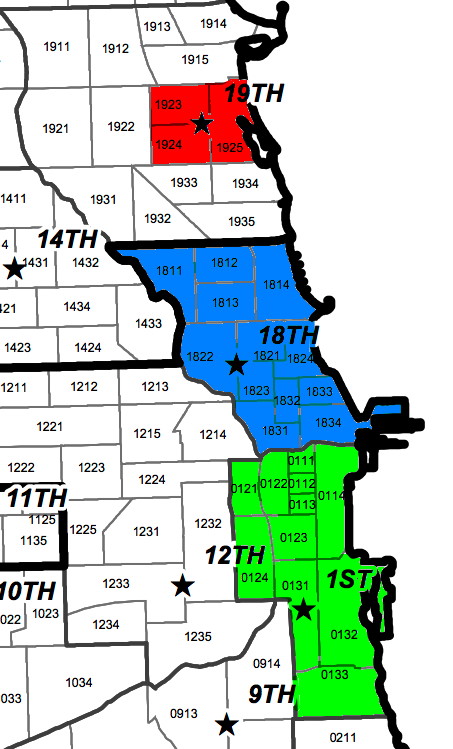 If anyone still believes that Wrigleyville and Boystown residents should “expect” to have as much violent crime and robberies as we have developed over the past couple of years because the decades-old bar strips and century-old stadium are “suddenly” attracting people to the area or because, as the alderman and police commander falsely claim, our neighborhood is just so darned congested, they should read on.

With the city’s release of crime data for August 31, we learned this:

During the month of August, the entire 18th police district, blue on the map to the left, reported 26 robberies.

Wrigleyville and Boystown’s section of the 19th district, colored red, had 26 plus 8 more. 34 robberies.

We also racked up more than twice as many robberies as the 1st police district, colored green on the map, which includes the entire Loop business district.
The picture below is what the 18th district looks like from the Lake. It’s home to Navy Pier; The Magnificent Mile; The River North, Division Street, and Rush Street entertainment districts; Lincoln Park Zoo; DePaul University; Northwestern and Loyola Universities’ 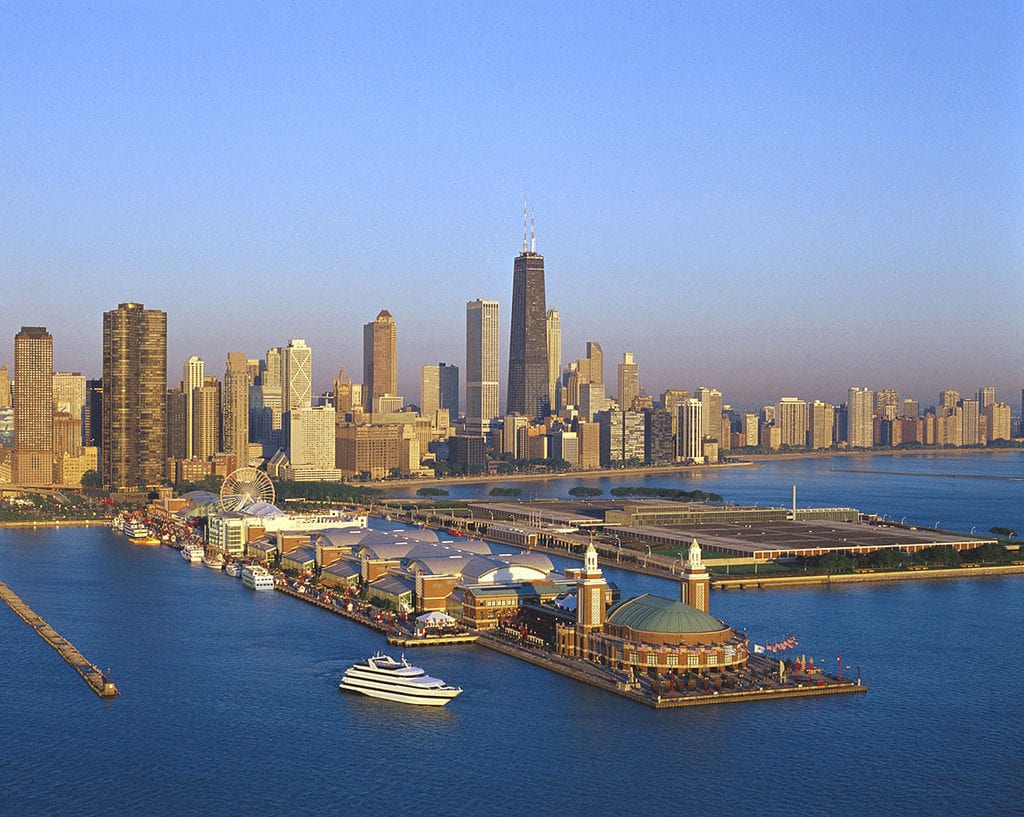 downtown campuses; Northwestern and Children’s Memorial Hospitals; skyscrapers including The John Hancock Building and Trump Tower; The Merchandise Mart; three miles of the Lakefront Path, including Oak Street Beach and North Avenue Beach; the Gold Coast, Old Town, and about two-thirds of the Lincoln Park neighborhood.

It’s hard to believe that Wrigleyville and Boystown are more congested, have more nightlife, and have more people wandering the streets with expensive stuff than all of THAT. But our alderman and police department say it’s true, so it must be true, right?

Boring statistics stuff: The Wrigleyville/Boystown count of 34 is the number of robberies within the official boundaries of police beats 1923, 1924 and 1925. It does not include robberies that occurred south of the dotted line that runs down the middle of Belmont Avenue or north of the dotted line in the middle of Irving Park Road. CWB’s Daily Ticker includes robberies on the excluded sides of Belmont and Irving Park in order to maintain an apples-to-apples comparison of crime statistics before and after the merger and beat realignments of the 19th and 23rd districts.
About CWBChicago 4363 Articles
CWBChicago was created in 2013 by five residents of Wrigleyville and Boystown who had grown disheartened with inaccurate information that was being provided at local Community Policing (CAPS) meetings. Our coverage area has expanded since then to cover Lincoln Park, River North, The Loop, Uptown, and other North Side Areas. But our mission remains unchanged: To provide original public safety reporting with better context and greater detail than mainstream media outlets.
Website Facebook Twitter YouTube