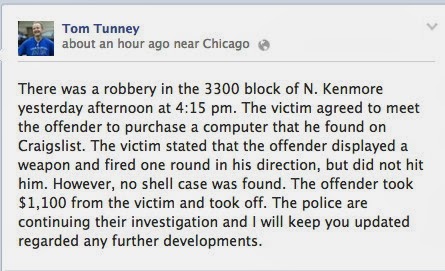 It is good to see Alderman Tunney being upfront about another neighborhood incident, although we can’t quite figure out how he decides which ones to publish on his Facebook page.

The alderman also confirms the information posted by a couple of our readers in our report’s comment section: the victim and offender met via a “for sale” ad on Craigslist.

We would like to offer a helping hand in one area, though. The alderman notes that “no shell case was found.” As we reported yesterday, the firearm was reported to be a revolver. Revolvers do not eject casings.