A man struck a female student on the head with a hammer “for no reason” at Altgeld and Sheffield, near the DePaul University campus shortly before 7 o’clock tonight.

The woman does not know her attacker. 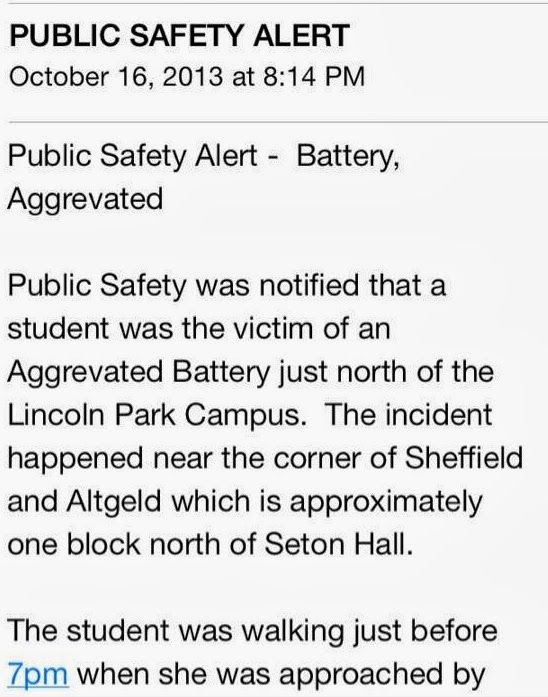 Police searched the area for the offender, described as a clean-shaven male, black, 20 to 30 years old, 5’10” tall, wearing a gray hoodie, a hat, blue jeans, and tennis shoes.

Tonight’s victim was not robbed.

Two weeks ago, however, the Chicago Police Department issued a community alert to warn residents of a robbery pattern in which victims were threatened with or struck with a hammer. One of the incidents listed in the alert was carried out by a lone male, black in the 2800 block of N. Southport, about three-quarters of a mile from tonight’s incident.

Image: Melanie Stone on Twitter
About CWBChicago 4360 Articles
CWBChicago was created in 2013 by five residents of Wrigleyville and Boystown who had grown disheartened with inaccurate information that was being provided at local Community Policing (CAPS) meetings. Our coverage area has expanded since then to cover Lincoln Park, River North, The Loop, Uptown, and other North Side Areas. But our mission remains unchanged: To provide original public safety reporting with better context and greater detail than mainstream media outlets.
Website Facebook Twitter YouTube