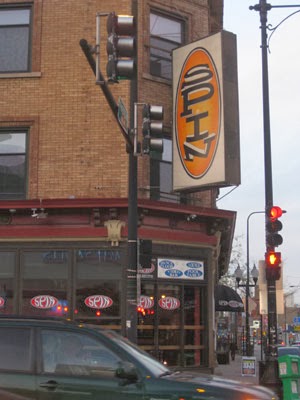 Doormen at Spin nightclub at Halsted and Belmont probably couldn’t believe their eyes around 11PM Wednesday night, after a man walked up, busted out one of their windows, and then strolled across the street to the Lucky Horseshoe Lounge.

An officer on patrol was flagged down by a Spin employee. He and another unit went into the Horseshoe and took the alleged offender into custody.

The incident is recorded as a criminal damage to property in CPD case #HW514100.

Tuesday, October 29, 12;52PM
DISPATCHER: We got a call that says there is a group of men trying to run a scam at the Belmont Red Line. That [scam] with the three bottle tops with a ball under one of them.

UNIT: We will have none of that. I’ll go check it out.

DISPATCHER: It’s the [cap] in the middle.

Offender Description of The Week
One of two suspected shoplifters inside the Gap at Broadway and Belmont around 1PM Wednesday was described as a “female, black, bald, and pushing a baby buggy.” Officers were able to spot her quickly.

Image: Chicago Bar Project
About CWBChicago 4360 Articles
CWBChicago was created in 2013 by five residents of Wrigleyville and Boystown who had grown disheartened with inaccurate information that was being provided at local Community Policing (CAPS) meetings. Our coverage area has expanded since then to cover Lincoln Park, River North, The Loop, Uptown, and other North Side Areas. But our mission remains unchanged: To provide original public safety reporting with better context and greater detail than mainstream media outlets.
Website Facebook Twitter YouTube