There have been two similar-sounding robberies in a concentrated area of nearby Lakeview today. Both failed attempts were carried out by two offenders: one functioning as the attacker and the other as the getaway driver. 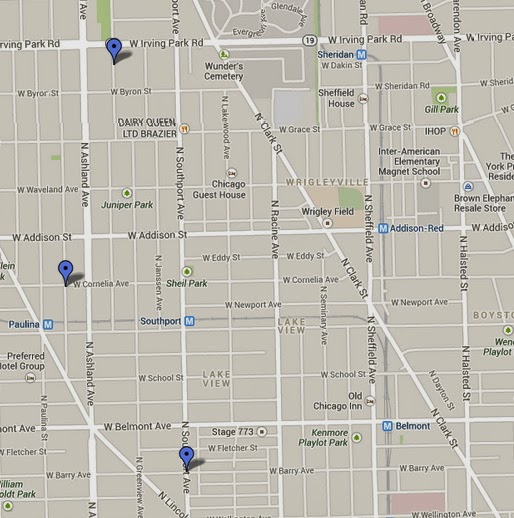 It is important to note that the Chicago Police Department has not connected the events, which may simply be coincidences, but CWB wanted to let you know about them.

Incident #1 CPD Case #HW490255
Just before 2PM today, a woman was physically attacked by a man who tried, but failed, to rob her in the 3900 block of N. Greenview near Irving Park Road. Witnesses say the offender escaped in a black Accura that was driven by an accomplice.

Driver: male, Hispanic, in his 30’s, bearded and wearing a baseball hat.

Incident #2 (CPD case #HW490766)
Another failed robbery of a woman took place less than a mile from incident #1 at 10 o’clock tonight.

A tall black male offender wearing blue jeans and a hoodie with a sports team name on the front followed a woman into a building and attempted to rob her near Marshfield and Cornelia. After failing to get any property from the victim, he fled to a waiting vehicle, described as a black Corolla that was driven by another person.

The attacker is believed to have a mustache and was wearing a skull cap. No further description of the get-away driver is available.

Additional Info
A third woman was pushed to the ground and robbed in nearby Lakeview around 5 o’clock this morning by a male, either white or Hispanic, who ran to a waiting getaway car.