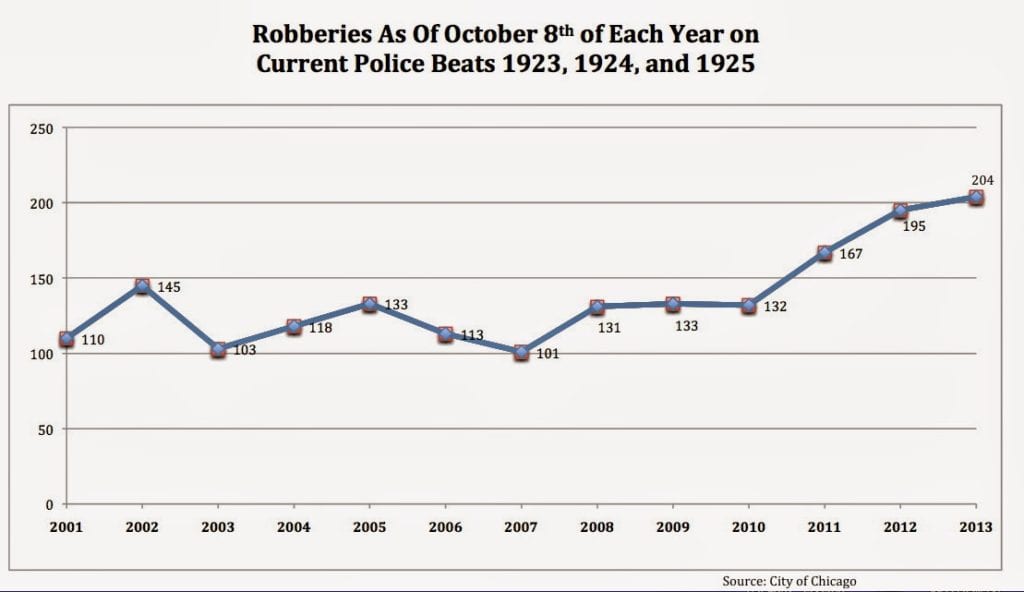 This image explains why 19th district police commander Elias Voulgaris doesn’t want to talk about statistics any more. It also explains why, rather than statistics, he would like the “biggest barometer” of his success to be “feedback.”
Good enough. Our feedback is that it is simply unacceptable for our once-safe neighborhood to be on pace to record an all-time high number of robberies for the third year in a row.
2011 set a record for robberies. 2012 beat 2011. And, now, 2013 is well on its way to being the new #1.
How high would this year’s victim count be if the commander had not been under pressure to address this problem? How high will next year’s victim count be? And what will the excuse be then?
We’ve repeatedly stated that manpower in the 19th district is down 20% to 25% since March of last year. Earlier this month, the commander threw out his estimate that the district has lost 69 police officers during that time.
You can rest assured that the real number, once you strip away the hocus-pocus, is much higher. Police executives have trouble counting things. After all, this is the same police department that told us that robberies were “down” or “essentially flat” month after month, yet, somehow, we have 54% more robberies this year than in 2010.
Speaking of Numbers
The mayor’s 2014 budget proposal will be out next week.

Expect lots of press about how there’s money to “hire new officers.” Just keep in mind that these new officers aren’t additional officers. They’re replacements for the men and women who’ve left the force. The department lost thousands, yes thousands, of officers through attrition over the past few years and they will likely never be replaced. So, while there may be more officers planned, it will actually be fewer officers than before. Remember, in the world of Chicago policing, up is actually down. And when crime is “down,” it’s actually up.

How will your alderman handle the 2014 budget? Will he demand a replenishment of the troops that his constituents have lost? (Ahh-Shh! Tom, don’t tell us again about the fact that there are problems in other districts. We know that. Your job is to represent us and our needs. Those other areas have their own aldermen to vote for their needs. You represent us.)
NBC reported last month that the 2014 budget will seek a 10% cut in police spending. That may or not be true.
Alderman Tunney has voted in favor of recent city budgets that cut police spending and has voted in line with the mayor’s wishes 100% of the time.  What will happen this year? Even a freeze in police spending would mean the department operates 2014 with less funding than previous years. (In this case, flat would be down.)
Perhaps you would like to share your thoughts feedback with Alderman Tunney as the budget season approaches? ward44@cityofchicago.org
If your alderman is James Cappleman, use Info@james46.org  (He votes in line with the mayor’s office 93% of the time.)
And, no, we don’t hate Tom Tunney. We just want him to represent our community’s needs and to be a leader.
Statistical stuff
We always provide online access to our data sets, which are sourced at the City Data Portal. Details are provided for every crime, including dates and addresses rounded to the 100 block.

The data set used to create this graph is available for your review here.
The complete list of 2013 robberies is here.