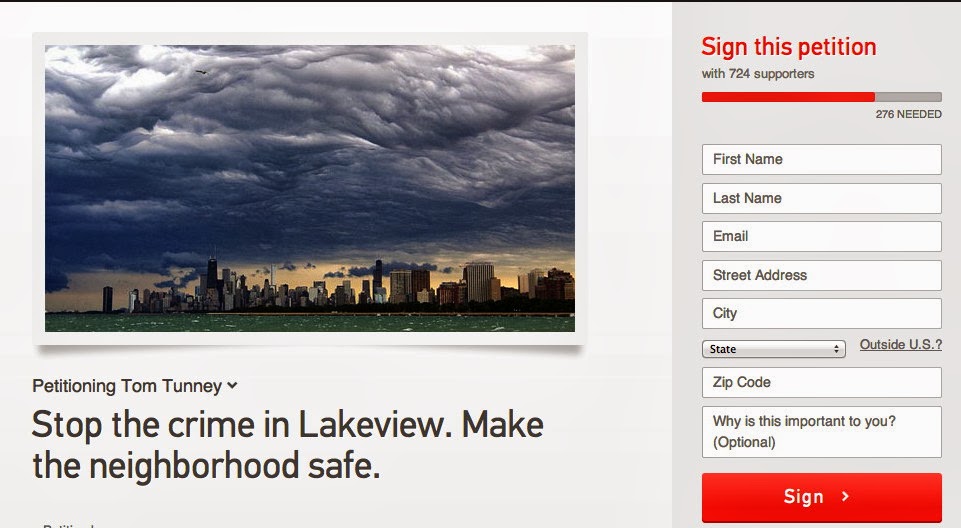 A newly-formed group, Citizens for a Safer Lakeview, started an online petition recently in an effort to show city and police leadership that our neighborhood is serious about seeing improvement in the crime problem we’ve encountered in recent years.

Petitioners are invited to share their reasons for signing the petition. CWB is sharing a few of the published reasons this morning.

This is extremely important because I was a victim. On the early morning of August 9th (3 AM), I was attacked 500′ from the entrance to my apt building. The assailant (s) knocked me unconscious, stole my Iphone, wallet, and my BELT, yes my BELT. My face hit the concrete, and my tooth went through my lip and I had to get stitches. I also had neck pains which are slowly going away. I’ve lived and visited this neighborhood for more than ten years and have never seen it in it’s current state, and it’s quite depressing.

My boyfriend has had his cell phone stolen from him on Roscoe and Elaine. My friend was recently jumped and mugged by 3 people in the alley behind Halsted off of Newport. My other friend was jumped and mugged on Belmont by the Red Line. I now have a sense of uneasiness walking around at night after a certain hour. Outside of my apartment complex, my friends had someone that was high try to get into the back door of their car, and they had to luckily drove away in time. My friend’s car got stolen off of Broadway, and another’s broken into.
———————

My son and his family live in wrigleyville and I am concerned for their safety….especially since they have to park in an alley where all the crime supposedly happens.
———————

Lakeview, particularly the Boystown area, used to be the safest place in the city! Now I’ve been mugged once and harassed a countless number of times and it needs to stop!
———————

I was recently robbed inside my store and the police said that they were not coming out and would do nothing about it. I did not see 1 police officer drive by after this occured from 1pm-6pm.
———————

Visited a friend recently. Was SHOCKED by what I saw. Could not believe that this was the same neighborhood I had seen a few years ago. It’s amazing that things have been allowed to get to this point without anyone doing anything about it!

My husband and I have a 4 year old daughter. We moved to this neighborhood because of the low crime rate and the multitude of things to do. Now there has been several robberies just down the street from where we live.

Briar Place has a lot of families with young children. Safety is of upmost concern.

If this continues we may be forced to move.

Please help us keep our community safe and strong.

If you have not yet signed the online petition, please consider taking a moment to do so. The group is on its way to reaching its goal of 1,000 signatures.

It took years for our neighborhood to devolve into what we are seeing today. It will take a committed, sustained effort to get things back to where they should be. Signing the CSL’s petition is one way to express your personal concern and magnify the voices heard at community meetings and through phone calls and emails our leaders receive.