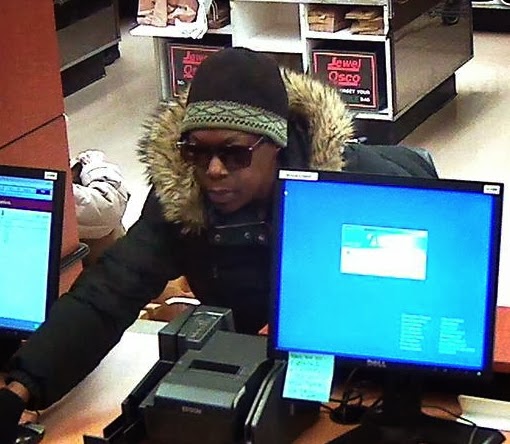 UPDATE 10:00PM: CWB has obtained this first image of today’s bank robbery in progress. The FBI tonight says today’s offender struck the same bank in April. Our original report from this afternoon follows.
————–
A solo bank robber made off with $500 in an afternoon heist at the TCF bank branch inside Boystown’s Jewel-Osco store, 3531 N. Broadway at Addison today.

The bandit handed a note to the teller demanding money at 3:52PM. No weapon was displayed.

After reviewing video surveillance, police have updated their description of the offender: female, black, about 40 years-old, 5’6″ tall, 150 pounds (also said to have a “large build”), wearing black sunglasses, a black parka with a fur hood, and a black knit cap with diamond-patterned band.

The same branch was robbed almost exactly six months ago, at 3:21PM on May 21.

Police have recorded the incident in CPD case #HW541217.

Image: Federal Bureau of Investigation
About CWBChicago 4360 Articles
CWBChicago was created in 2013 by five residents of Wrigleyville and Boystown who had grown disheartened with inaccurate information that was being provided at local Community Policing (CAPS) meetings. Our coverage area has expanded since then to cover Lincoln Park, River North, The Loop, Uptown, and other North Side Areas. But our mission remains unchanged: To provide original public safety reporting with better context and greater detail than mainstream media outlets.
Website Facebook Twitter YouTube