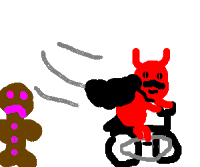 What’s going on with the red-headed thievery around here?

A resident saw a man break into cars and then poke around in the bike storage room of a building in the 700 block of Sheridan around 3:15 Saturday afternoon.

A few minutes earlier and a few blocks away, another citizen saw a man with a similar appearance removing bicycles from the basement of a building in the 900 block of Belle Plaine.

Police officers believe the same offender was involved in both locations. He is described as male, white, mid- to late-20’s, with red hair, a red beard, and a black eye. They know the offender’s name.

DISPATCHER: We got a homeless person taking a shower in the bathroom at the Boston Market, 3020 N. Ashland. Refusing to leave.

UNKNOWN OFFICER: He has to wait for the conditioner to come out!

Image: Drawception.com
About CWBChicago 4360 Articles
CWBChicago was created in 2013 by five residents of Wrigleyville and Boystown who had grown disheartened with inaccurate information that was being provided at local Community Policing (CAPS) meetings. Our coverage area has expanded since then to cover Lincoln Park, River North, The Loop, Uptown, and other North Side Areas. But our mission remains unchanged: To provide original public safety reporting with better context and greater detail than mainstream media outlets.
Website Facebook Twitter YouTube