Well, well, well. Once again we see that the community simply cannot trust what its police department says. 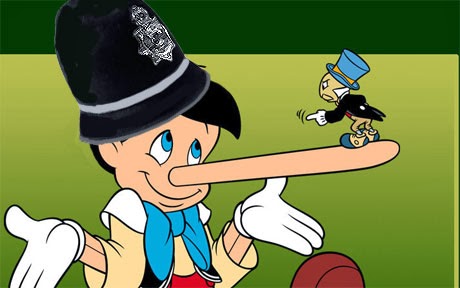 At a neighborhood CAPS meeting last month, 19th district police Commander Elias Voulgaris had a “frank” discussion with residents. Among the “honest” things he said is that our district has lost 69 police officers since March 2012.

This  morning, a CPD spokesman is quoted by DNAinfo as saying that the number of officers lost is not 69. It’s 107.

That’s closer to the truth. But, as CWB has repeated stated, the actual number of officers lost is still higher than that.

A Laugher
In the same DNAInfo article this morning, police spokesman Adam Collins says with a straight face that

while district 19 is down 24 percent in overall crime and has seen reductions in almost every crime category, there’s more work to be done and we will continue our partnership with the community until we reach the ultimate goal of no crime.

Did ya catch that? According to the spokesman, manpower in the district is down 24% and crime is down 24%. Hey. Do you think there are at least 24% fewer crimes reported because there are 24% fewer police officers to make reports? We do.

And as for the police goal of reaching “no crime,” the district is well on its way. As soon as the district dumps the remaining police officers, there will be no cops to file reports and zero crime reported. Success!

We Don’t Like It When You Make Us Sound Greedy
Have you caught wind of the latest techniques being used to deflect community demands for a return to 2012 policing staffing levels?  The one where aldermen and police executives make it sound like we want more police? Here are some examples:

Every community in the city would like to see more police officers. We are #6 as far as staffing so that means 16 other districts have less manpower than the 19th District.

Not more cops, commander. The same number we had a year ago. That’s what we want. And as for us being #6 in staffing, well, how does our district population and unique policing needs rank compared to other districts?

Paying for additional officers in a way that does not risk further inflating our structural deficit is a very real challenge.

Ahh-ahh-ahh. Not additional officers, alderman. The same number we used to have. We’re not asking for MORE.

And 44th ward alderman Tom Tunney’s most recent tune has been to go the generic route. In a CLTV interview posted yesterday:

There’s never enough cops in our ward, period. And in our city.

You’re doing exactly what about the problem, Tom?