Neighboring businesses teamed up to help after a thief stole $200 from a mom & pop dry cleaner near Belmont and Sheffield this afternoon.

Police were flagged down by employees of neighboring businesses at 12:55 and were quickly offered surveillance footage of the offender. 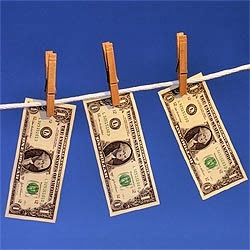 According to an officer, the creep distracted an employee at the cleaners, then swiped $200 before high-tailing it.

He is described as male, black, with dreadlocks, wearing a yellow hooded sweatshirt with red print and khaki pants.

Cleaning Up
This is starting to sound familiar.
A man who lives in the 600 block of Cornelia reported that he saw a thief trying to steal money from a laundry machine around 11 o’clock this morning. It is not clear if the attempted theft was in a residential building laundry room or in a nearby self-serve laundry business.
The alleged offender, described as a white man with a red beard, wearing a black hat and black jacket, was last seen running southbound in an alley behind Broadway.
Police could not find the caller upon arriving at the Cornelia address.
On Halloween night, a white male offender was chased out of a laundry room two blocks west on Cornelia.
There is no evidence that the two incidents are related.
Image: GlobalResearch.ca
About CWBChicago 4363 Articles
CWBChicago was created in 2013 by five residents of Wrigleyville and Boystown who had grown disheartened with inaccurate information that was being provided at local Community Policing (CAPS) meetings. Our coverage area has expanded since then to cover Lincoln Park, River North, The Loop, Uptown, and other North Side Areas. But our mission remains unchanged: To provide original public safety reporting with better context and greater detail than mainstream media outlets.
Website Facebook Twitter YouTube