Chicago Police logged three robberies over the course of 10 recent days near the Wellington Brown Line station, according to city records. The Wellington station sits on the Illinois Masonic Medical Center campus. 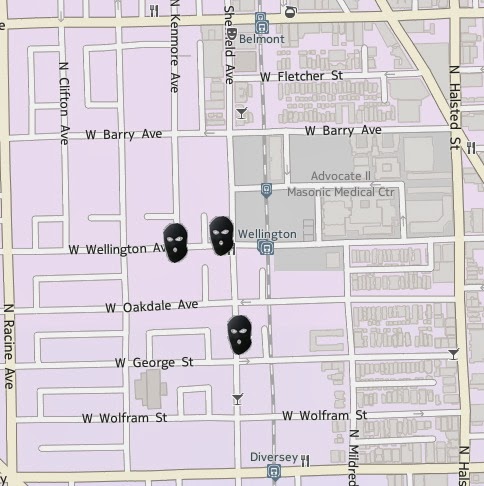 It is not clear if the robberies are connected or if the spike is a coincidence.

One possibility is that an increased police presence one stop north at the Belmont L station is pushing robbery offenders to safer waters.

The three recent robberies near the Wellington stop are:

• A strong arm robbery on the street at Wellington and Sheffield at 1AM on Saturday, November 16. CPD case #HW536769

• An aggravated robbery on the sidewalk on Sheffield south of Oakdale at 2:30AM on Saturday, November 23. CPD case #HW545560

By comparison, the immediate area of the Belmont station has recorded just two robberies in November.

According to CPD records, beat 1933, which includes the area bordered by Halsted, Lincoln, Belmont, and Diversey, has recorded 47 robberies so far this year.  At this point in 2012, it had logged 39 robberies.