A follow-up and a reader’s note for Sunday afternoon…

As we reported this weekend, there were four robberies reported in 14 minutes Friday night. One victim was reported to have a broken leg. Today, more details come in via our comments section:

Know victim and family, a senseless act, defenseless victim was kicked and stomped on to point of breaking his femur. Appealing to anyone witnessing or have info on this robbery/assault to please report to CPD whether think relevant or not.These thugs need to be caged before they strike your family or friends

Another reader’s weekend pizza delivery came with a note stapled to the outside of the box: 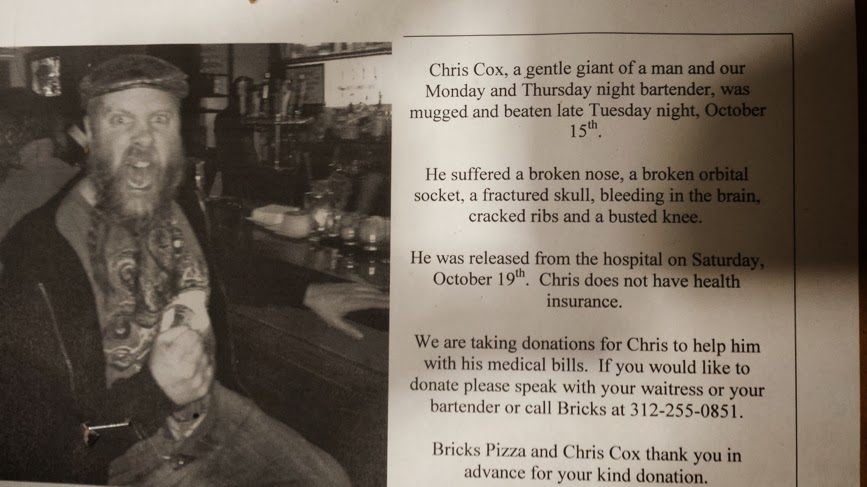 Chris Cox, a gentle giant of a man and our Monday and Thursday night bartender, was mugged and beaten late Tuesday night, October 15th.

He suffered a broken nose, a broken orbital socket, a fractured skull, bleeding in the brain, cracked ribs and a busted knee.

He was released from the hospital on Saturday, October 19th. Chris does not have health insurance.

Bricks Pizza is taking donations to help their guy out. We do not know where Chris was attacked.

Robberies are often referred to here on CWB as being “strong arm robberies.” That’s the official term. As you can see from the experiences of our neighbor who now has a broken thigh and Chris Cox’s horrible encounter, being “strong armed” is a whole lot worse than it sounds.