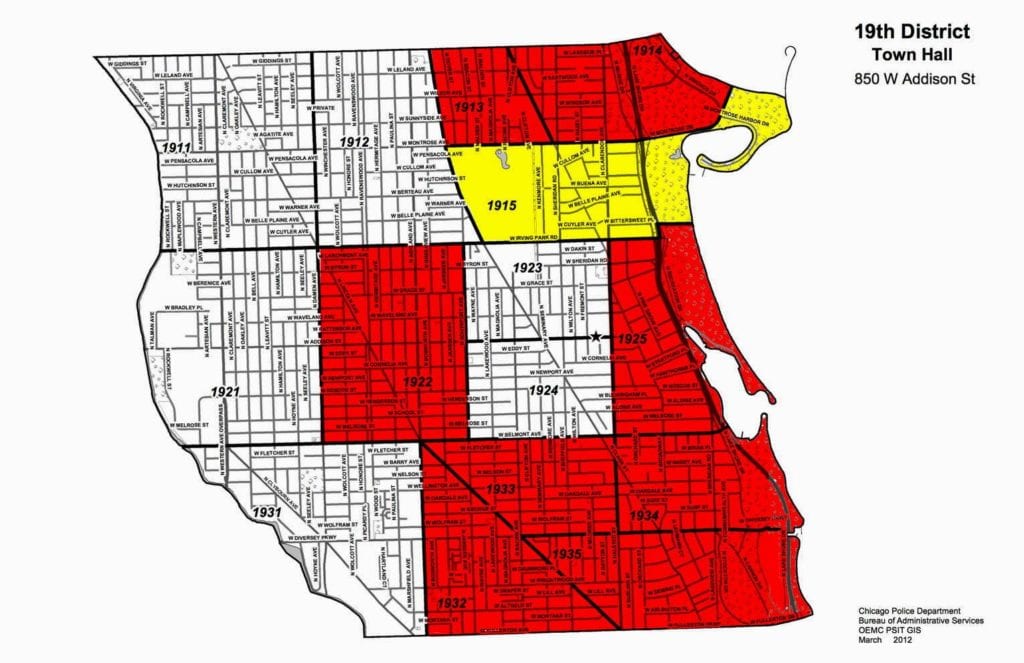 What’s worse than not having cars assigned to 8 of our district’s 15 police beats?

How about not having cars assigned to NINE of our beats?
And having no rapid-response units AND a grand total of two tactical cars on duty.

That’s exactly the level of police service we were given in the 19th district on Sunday from sunrise to early afternoon.

There were six patrol cars and two tactical units on duty to protect one of the largest police districts in the city of Chicago.

Red on this map indicates areas that had no police cars assigned Sunday morning. The yellow area was “assigned” to a police paddy wagon. In reality, though, the wagon spends the entire day hauling prisoners from place to place.

So, who’s the police genius who decided that a morning with 9 missing police beat cars would be a good time to schedule zero rapid response cars and only two tactical cars to pick up the slack?

Upon seeing the ridiculously limited resources he would be working with Sunday morning, one police dispatcher sighed, “Maybe I should go home, too.”
About CWBChicago 4363 Articles
CWBChicago was created in 2013 by five residents of Wrigleyville and Boystown who had grown disheartened with inaccurate information that was being provided at local Community Policing (CAPS) meetings. Our coverage area has expanded since then to cover Lincoln Park, River North, The Loop, Uptown, and other North Side Areas. But our mission remains unchanged: To provide original public safety reporting with better context and greater detail than mainstream media outlets.
Website Facebook Twitter YouTube