Last week, the Inside-Booster community newspaper published a report about the number of crimes that have occurred at 3656 N. Halsted, the address of the Center on Halsted.

CWB has been provided with more than 60 pages of police reports that document crimes that have been reported at the Center. We will be sharing some of those reports with you in the coming days.

To be clear, we believe the Center on Halsted and most other social service agencies in our neighborhood provide essential services that should be located here. Our disagreement is with the agencies’ public denials of any connection whatsoever between a limited number of their clientele and crime in our neighborhood.

We also strongly disagree with most of the services’ policies regarding cooperation with the police. While they all profess to have strong and healthy relationships with the police department, CWB can tell you with certainty that many police officers in our district disagree with those assessments.

Today, we will share with you the official details of three sex crimes that are alleged to have occurred inside the Center on Halsted. As you can imagine, some of what follows is graphic and may be difficult to read.

Copies of the complete police reports are available on our Google Drive.

The police department blacked out some portions of the reports to protect parties and personal information. We have provided these public records exactly as they were given to us. Please remember that allegations do not equal guilt. 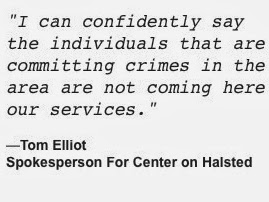 Criminal Sexual Assault — December 3, 2009 10:30AM
A 20-year-old woman walked into a hospital emergency room complaining of abdominal pains. There, she told police that

after a verbal altercation with her [21-year-old] ex-boyfriend, he pulled her by the back of her shirt into the mens bathroom [at Center on Halsted], pulled her pants down to her knees and…sexually assaulted her for 20 minutes. […] Victim and offender continued arguing after which offender left building to unknown location.

The disposition of the case is not known.

Officers conducting a routine “premise check” at the Center on Halsted were stopped by a person or persons whose identity is not revealed in the police report.

The officers were told that a 36-year-old man allegedly touched a juvenile male inappropriately. The alleged offender, identified in the report as Max Pagan, was standing outside of the Center on Halsted.

According to the police report, in a follow-up interview, the underage victim told officers that he

was in the bathroom when [the] offender who is a stranger to him approached and grabbed victim’s cell phone while…the victim was holding it in his hand. Victim pulled his hand away from offender. Offender being a 36 year old adult male, began to caress victim’s chest in a sexual manner and offender stated to victim “are you scared?” Offender then proceeded to slide his hand inside the victim’s pants through the waist-line and attempted to fondle [the victim]. 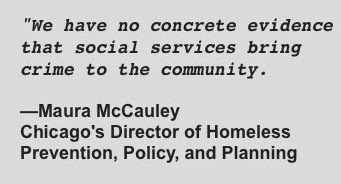 The victim fled. When asked what he thought the man was going to do to him, the victim told police, “he was going to sexually molest me.”

At that point, the alleged offender was banned from the Center on Halsted and was escorted out of the building.

Criminal Sexual Abuse — September 25, 2012 9:15AM
According to the police report, a female victim fell asleep inside the COH. She awoke to find a man “standing over her fondeling [sic] her left breast, at which time [she] stated, ‘keep your hands offme [sic].”

The alleged offender replied, “Bitch, I’ll touch if I want to,” prompting the victim to scream for help.

COH security followed and detained the alleged offender for police.

The disposition of this case is not known.

Image: Cook County Sheriff’s Office
About CWBChicago 4360 Articles
CWBChicago was created in 2013 by five residents of Wrigleyville and Boystown who had grown disheartened with inaccurate information that was being provided at local Community Policing (CAPS) meetings. Our coverage area has expanded since then to cover Lincoln Park, River North, The Loop, Uptown, and other North Side Areas. But our mission remains unchanged: To provide original public safety reporting with better context and greater detail than mainstream media outlets.
Website Facebook Twitter YouTube