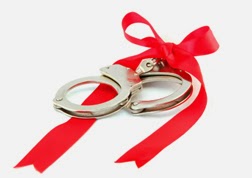 Some of the early-arriving TBOX bar crawl participants have begun to feel the effects:

1:22PM: Officers on patrol cite three for drinking on the public way across from Wrigley Field, 1027 W. Addison.

1:34PM: Resident at 12XX W. Cornelia says an intoxicated white man dressed as Santa Claus keeps banging on her door. He’s mumbling something and she can’t understand what he’s saying. Police move him along.

1:42PM: Resident at Grace and Southport finds a “very high” white female wearing a red hat and black dress lying in his yard. Officers find the incapacitated woman at Byron and Clark. She is hauled away by ambulance since the officer doesn’t “know what else to do with” the resident of southwest suburban Woodridge.

2:19PM: The 19th district Tactical Team lieutenant calls for a police paddy wagon to come to Clark Street south of Addison. TBOX’s first two arrests are made outside of Moe’s Cantina.
Since things are heating up (or melting down, as the case may be) CWB will withhold further TBOX updates until the event winds down late tonight.
Image: Lawyers & Settlements
About CWBChicago 4360 Articles
CWBChicago was created in 2013 by five residents of Wrigleyville and Boystown who had grown disheartened with inaccurate information that was being provided at local Community Policing (CAPS) meetings. Our coverage area has expanded since then to cover Lincoln Park, River North, The Loop, Uptown, and other North Side Areas. But our mission remains unchanged: To provide original public safety reporting with better context and greater detail than mainstream media outlets.
Website Facebook Twitter YouTube