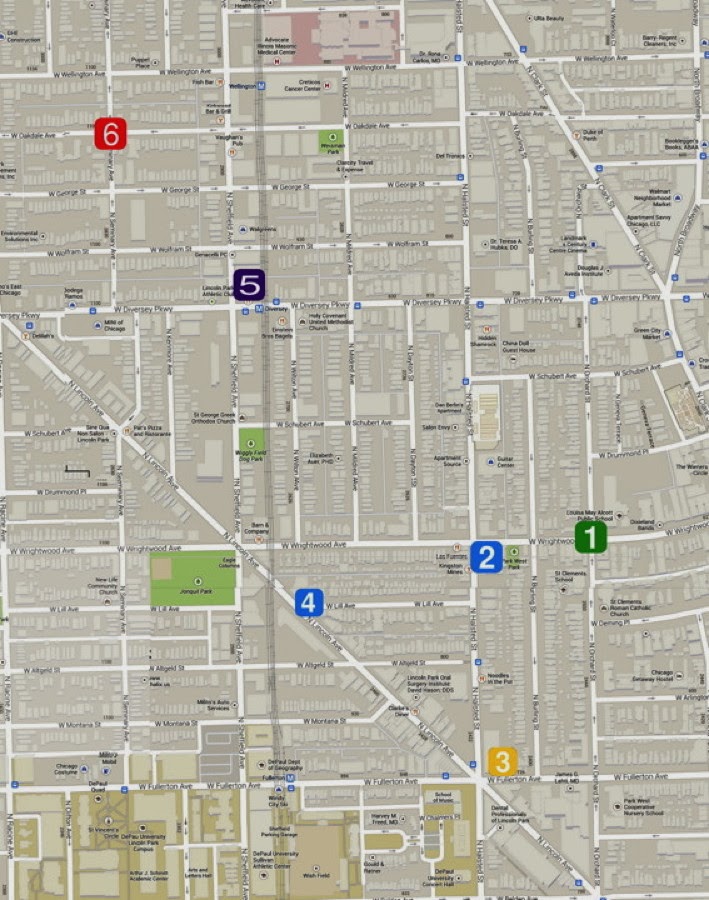 It’s been a strange couple of days in a nearby section of Lincoln Park and southern Lakeview.

There has been a series of crimes that involve similarly-described offenders.

The events have occurred during afternoon and evening hours.

#1 – Strong Arm Robbery – 8:20PM
Witnesses see two men beating up a third man near the intersection of Wrightwood and Orchard.  The victim’s wallet, containing $100, is taken and the victim winds up at Illinois Masonic Medical Center.

His attackers are described as two 15- to 17-year-old black males. One offender has a backpack and the other wears a brown jacket. They run west on Wrightwood, then south toward Fullerton. CPD case #HW573359.

#2 – Credit Card Fraud/Disturbance – 9:01PM
An off-duty police sergeant reports a disturbance inside the La Bamba burrito stand at Wrightwood and Halsted, two blocks from the robbery location. Two young black men become argumentative after they are caught using someone else’s credit card. The two youths flee. Police determine that the credit cards and other property belong to the robbery victim. Recorded as credit card fraud in CPD case #HW573440.

#3 – Battery – 9:06PM
Five minutes after and one block south of the burrito stand incident, a restaurant manager reports that two offenders grabbed him as he loaded groceries into the back door of his restaurant near Halsted and Fullerton. The offenders’ intentions are not known. They are described as two men, black, in their mid-20’s, 5’7″ tall, wearing hooded jackets. The case is logged as a battery in CPD case #HW573425.

#4 – Disturbance – 10PM
A salon in the 2500 block of Lincoln reports that two men refuse to leave their lobby. The men then “removed the lightbulbs” from the salon’s fixtures and flee before police arrive.

#5 – Robbery Attempt – 12:56PM
A woman reports that a man came up to her from behind near Sheffield and Diversey, battered her, pushed her to the ground and into the snow. He failed to wrestle away the victim’s purse and then fled toward Halsted Street. The offender is described as male, black, about 18 years old, wearing a gray hoodie and a purple du-rag. CPD case #HW574046

#6 – Purse Snatching – 4:19PM
A woman reports that her purse and phone were snatched by a man near Oakdale and Seminary. The thief ran into a nearby alley where he jumped into a waiting 1980’s-era black or bluish-gray car. He is described initially only as a black male. Recorded as a purse snatching in CPD case #HW575086.

In addition to these incidents, a man was robbed in the early Sunday morning at the intersection Fullerton and Halsted/Lincoln, as CWB reported this weekend. The offenders fled in a gray vehicle.