This wasn’t easy.
Of all of the half-truths, quarter-truths, and full-blown lies that have been spewed by various parties regarding the neighborhood’s escalating street crime problem, which were the biggest whoppers?
After sifting through them all, we’ve decided that these five lies shall be honored with CWB’s very first Golden Pinocchio awards for the most stunning, in-your-face falsehoods of the year.
19th district police Commander Elias Voulgaris

“Frankly individuals are robbed walking through alleys, not paying attention to their surroundings.”

During an ABC7 I-Team report about robberies in our neighborhood, Commander Voulgaris went on record with that gem.
The commander’s statement is part of the city’s ongoing effort to make it seem that “ordinary” people who walk the well-lit streets and use good judgement have nothing to worry about.
The fact is that only 7% of this year’s robberies occurred in alleys. The vast majority—nearly 75%—of the attacks happened on streets and sidewalks.
Another cornerstone of the city’s minimization efforts is beginning to show signs of strain. Once a problem largely limited to overnights, more and more robberies are occurring during “normal” hours.
Only time will tell if the hoodlums’ migration to “better shifts” is a short-term phenomenon or a permanent change in the way they do business.
The Center on Halsted

During the same TV news report that featured Commander Voulgaris’ nominating performance, Center on Halsted (COH) spokesman Tom Elliot told the camera,
“I can confidently say the individuals that are committing crimes in the area are not coming here for our services.”
One is left to wonder, if the COH does not attract any criminal elements, why  is it patrolled by off-duty police officers armed with handguns?
In December, CWB posted Chicago Police Department reports that document three sex crimes and a series of crimes carried out by known gang members inside of the COH. One victim of a gang member’s assault is a still-serving member of the COH’s executive board.
Alderman Tom Tunney

At least 7 robberies were reported in Wrigleyville and Boystown during the early morning hours of Sunday, July 14.
Alderman Tom Tunney’s office tried to make it all disappear by claiming that, there were “6 or 7” robberies in all of Lakeview that weekend and

“the Police have six individuals in custody from this past weekend and two they believe are connected to other robberies as well.”

Well isn’t that a tidy little wrap up? Done and done!
Couple of problems. First, no one had been arrested for any of the robberies in Wrigleyville and Boystown. Second, if the area of concern that weekend is changed to the entirely of Lakeview, there were actually 13 robberies, not “6 or 7.”
The Chicago Police Department

“District 19 is down 24 percent in overall crime [this year] and has seen reductions in almost every crime category.”

That’s the gospel according to CPD spokesman Adam Collins
The percentage decrease in crime reports filed is very, very close to the percentage of manpower the 19th district lost over the same period: 21%.
21% fewer cops means you get far fewer crime reports filed. Duh.
Think about that for a sec. The police and politicians expect us to believe that while robberies have set record highs three years in a row and Lakeview is one of only a handful of community areas to see an increase in violent crime,  all of those other criminals—the petty thieves, the graffiti sprayers, the bike rip-off artists, the pot smokers—all of them have left the neighborhood in droves. It’s just robbers and violent offenders who are coming here. Does that make sense? Of course not. 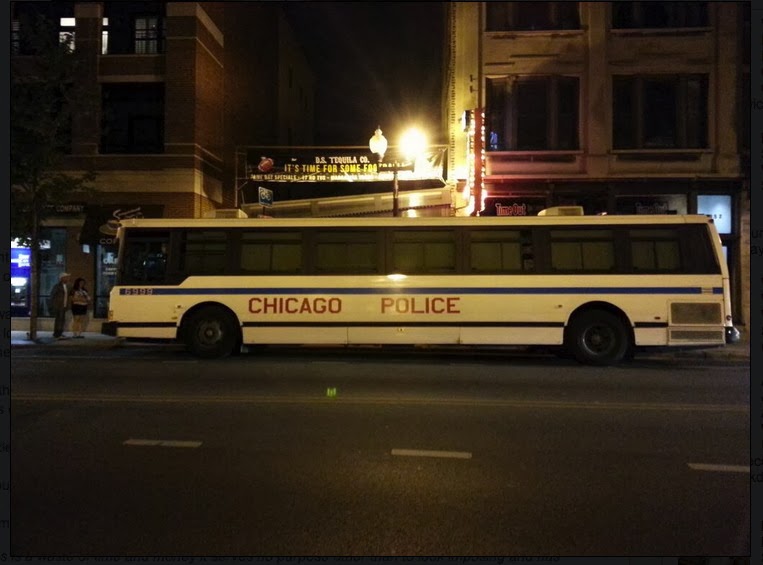 The department gets an honorable mention for its ridiculous decision to to park a huge, completely empty “police” bus on Halsted Street one August weekend.

The bus was literally driven into position by one person, parked, and left for the weekend to “project force.” In reality, the bus reduced available manpower because a cop who would ordinarily have been on patrol was assigned to stand there and guard it.

Citing a Chicago Police Department estimate, Chicago Pride Parade organizers claimed that this year’s event drew 1 million people.
One. Million. People.
It almost certainly did not.
Did it draw a lot of people? You bet. And if you were on Halsted between, say, Addison and Belmont, it probably felt like a million people. But the fact is that it would be impossible to stuff a million people into the parade route.
The exact number of attendees wasn’t particularly important until organizers and officials started using the impossibly large crowd number to water down the number of problems that were experienced during and after the event.
Of course more than 60 people were battered and 5 people were robbed and riot-fearing cops forced bars to close early and the 19th district commander had to call in support troops from six neighboring districts to tamp down the post-parade mayhem.
Waddaya expect when there were A MILLION PEOPLE there?
Math is hard. But let’s take a look-see.  To have 1 million spectators, the parade would need to squeeze the seating capacity of 1.15 Wrigley Fields into the sidelines on every single block.
In an unrelated article, a Chicago Police Department spokesman told the Sun-Times that

Crowd estimates are determined by taking the total square footage of the area and dividing it by the space occupied by the average person. If an event were wall to wall with people, which few are, that would be 3 feet by 3 feet.

OK. Let’s go for it.  By that measure, if the entire 2.64 mile parade route were “wall to wall with people” 20-feet deep on both sides of the street from start to finish, there would be a maximum of 61,952 people at any given time.
The entire crowd would have to turnover more than 16 times in order to have a million people “attend.”
In the same Sun-Times story, an expert said that

a dense crowd is made up of about six people per square meter.

Using that formula, a fully-packed parade route would bulge with 310,798 people
Even with this more favorable estimation, the crowd would have to churn completely 3.3 times in order to accommodate a million people.

Online resources generally agree that the best way to estimate a crowd size is to take a photograph of the crowd from overhead, place a grid over the pic, count the number of people in one square of the grid and build up from there.

Anyone care to set the over/under on the 2014 crowd estimate? 1.1 million?