It was only 35-degrees overnight, but some animals were acting as if it were the height of summer. A number of batteries were reported in the area last night, including a possible string of attacks that victimized innocent people from Broadway and Barry to Clark and Roscoe over the course of several hours. Here are the details:

9:42PM
Multiple callers dialed 911 to report a “gang” of people fighting on the corner of Belmont and Sheffield. Officers respond, but no arrests are made.

12:49AM
A patron calls 911 from inside Scarlet bar, 3320 N. Halsted, to report that a man had beaten him and that the offender was refusing to leave the premises. Officers arrived only to learn that the offender—who made the dubious claim of being an off-duty cop—had fled the scene southbound on Halsted in cab #414.

The alleged attacker is described as male, black, 5’7″ tall, heavyset, wearing a blue and white sweater, blue jeans, and eyeglasses. A police report has been filed. 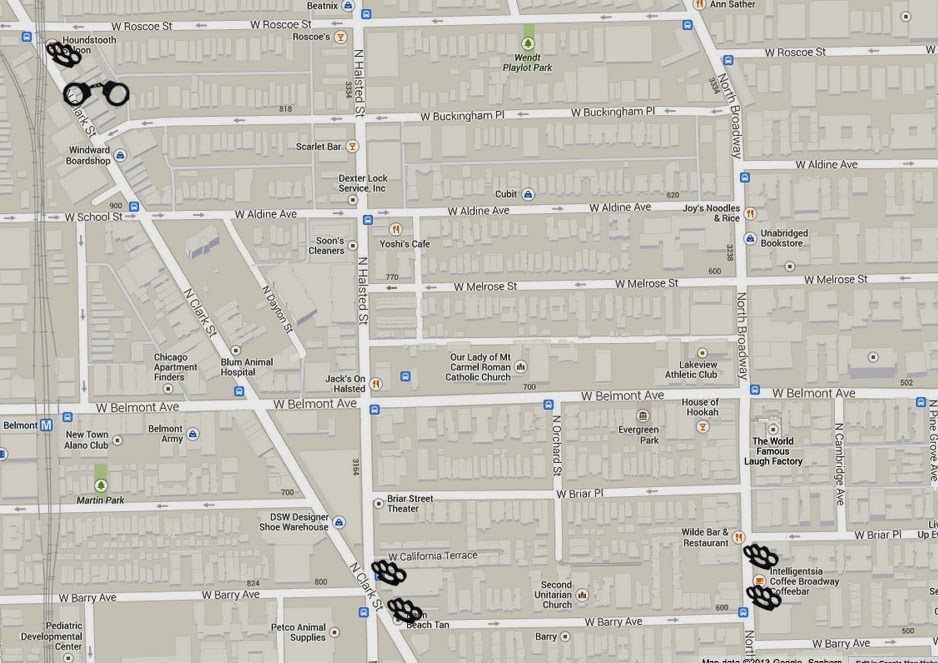 A series of random attacks on pedestrians and workers was reported along Broadway and Clark Street this evening. A man has been arrested in connection with at least one of the incidents.

The first sign of trouble came at 5:43PM when a 31-year-old man was reported to be down, breathing, but non-responsive at Flub A Dub Chub’s hot dog stand at 3021 N. Broadway. The man was gone when police arrived.

He was found about 30 minutes later when passers-by reported a man bleeding from the head outside of Chipotle at Broadway and Belmont. The man was transported to Illinois Masonic Medical Center by ambulance for treatment. CPD record HW577234.

At 8:11PM, a witness reported seeing a man attack a delivery driver at Broadway and Barry. Police could not locate a victim upon their arrival, but the caller described the offender as male, white, about 35-years-old, wearing a black hoodie.

Then, at 9:34PM, a white male wearing a black hoodie attacked victims at the CVS pharmacy on Clark at Barry as well as at the Domino’s pizza next door. The CVS victim was taken to Illinois Masonic. Case numbers HW577424 and HW577398.

Police took a man into custody near Clark and Roscoe at 10:40PM. At this point, he only been charged in connection with the CVS incident.