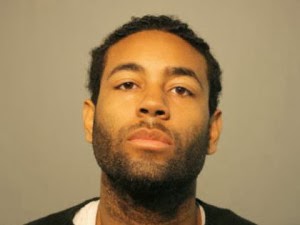 The Sun-Times has more information (LINK DEAD) about the man who was arrested after robbing a woman he followed home from the Paulina Brown Line station late Thursday night.

Martise Earl Lowe, 21, of the 3300 block of North Broadway, was ordered held on $300,000 bail Saturday on charges of home invasion and aggravated kidnapping.

Authorities say he followed the 26-year-old woman to her apartment in the 1700 block of West Henderson just before midnight Thursday, put a hand around her throat and threw her to the ground, then took off with her MacBook and iPhone.

Lowe is on probation for a robbery.

The robbery Lowe is on probation for took place in Wilmette during July 2012. The victim was a 65-year-old woman according to a press report. Is it us, or does his Wilmette mugshot make him the the oldest-looking “20 year old” of all time?

Lowe had a Humboldt Park address at the time of his arrest in Wilmette.

Since then, he managed to get a new address in the 3300 block of N. Broadway. Hmm. There aren’t very many residences in the 3300 block of Broadway. That strip is almost entirely one-story commercial buildings. There are a handful of apartments above Starbucks at Broadway and Roscoe. And, then, there is that church where the Broadway Youth Center set up shop one year ago.

Image: Chicago Police Department
About CWBChicago 4360 Articles
CWBChicago was created in 2013 by five residents of Wrigleyville and Boystown who had grown disheartened with inaccurate information that was being provided at local Community Policing (CAPS) meetings. Our coverage area has expanded since then to cover Lincoln Park, River North, The Loop, Uptown, and other North Side Areas. But our mission remains unchanged: To provide original public safety reporting with better context and greater detail than mainstream media outlets.
Website Facebook Twitter YouTube