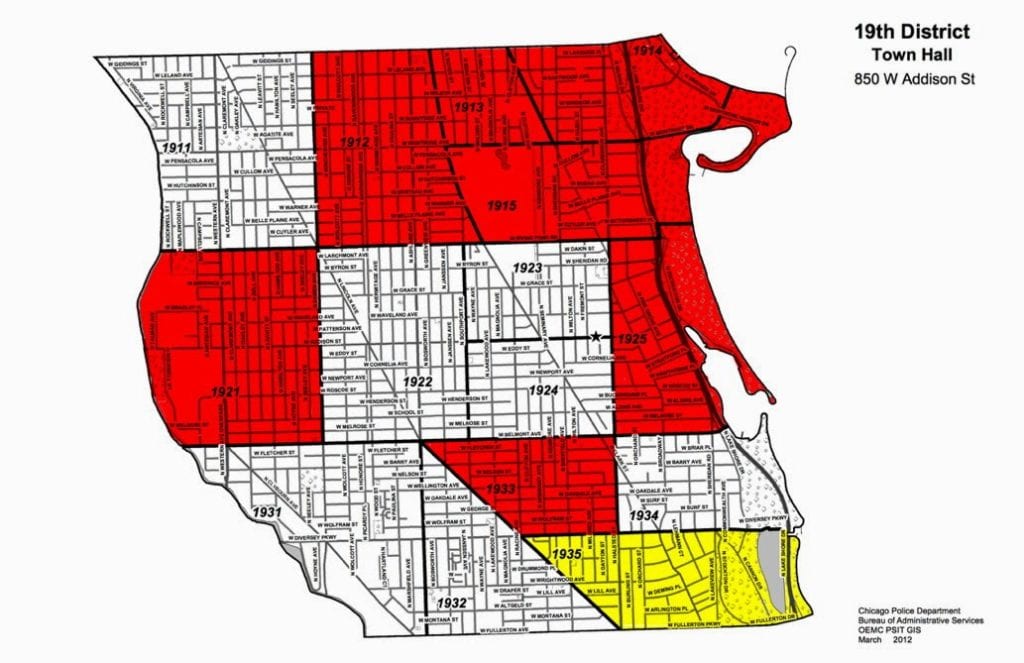 Red on this map indicates areas of the 19th district that had no police beat cars assigned to them from late last night until early this morning. A paddy wagon was assigned as the “beat car” in the yellow section, even though they operate across the district transporting prisoners.

That’s 7 out of 15 police beats without dedicated beat cars overnight. 95% of Cappelman’s ward–which includes Uptown and the northwest part of our neighborhoods–had no beat cops last night.

In addition to all of that, our district had zero sector sergeants on duty last night. Technically, there should be three of those.

So, why the Alderman James Cappelman Memorial Police Staffing Map?

Well, after a teenager got shot twice in the head in broad daylight while standing at a major intersection in his ward this summer, Cappelman declared that he was

insisting on a commitment of more police officers on the street before we vote on the 2014 City Budget.

The next month, Cappelman backed out of that demand for more police officers long before the budget even came up for debate. He decided that, rather than more police officers, he’d rather spend $110,000 on social services to cut down on public drinking, saying,

Three weeks after voting in favor of the 2014 police budget without insisting on police officers, nearly his entire ward was left without police coverage due to understaffing. Enjoy the next year of your little experiment, Alderman.

Other comments and emails regarding 19th district staffing:

Off topic but info I think the neighborhood needs to know. Earlier someone posted that there are 8 [police officer transfer opportunities] in the 019th district. The problem is I know of at least 18 officers who are bidding out on the same bid to other districts. So yes [the loss of manpower] continues 8 officers in 18 out net loss of 10. That is of course 18 that I know of, there might be more…

I’m a Belmont business and I have recently noticed an absence of our day hours foot patrol. I called the CAPS office and was told due to manpower he has been assigned to other areas. This is the busiest time of the year for stealing and I find it very odd that NOW the commander took him away…since there has been no police presence on Belmont I have had 5 thefts just from my store!What should I do? Is a call to the alderman warranted? The commander?

it came to my attention by some others who have also seen a change in absence of our foot patrols in the previous blog named CHRISTMAS COMES EARLY. I was at the C.A.P.S. meeting at District 19 @ the police station few weeks ago and this is very true about the depletion of many cops that were working as foot patrols,both on belmont and halsted streets, are not going to be any more. And when speaking and hearing about this in the open public meeting,NO answers were given by the C.A.P.S. Sergeant why this is. typical. Very unnerving was that the 1 openly gay police officer who is also being shifted away and will be silenced on the overnight shift away from “Boystown” patrolling. I speculate,as a proud gay man why this occurring. Perhaps the TownHall Police station aren’t as responsive to the gay, lesbian, trans. people as they proclaim themselves to be.Maybe its time that the person in charge of the Police District 19 should reconsider being in the next annual pride parade as he may not be as supportive of our challenges and priorities.We as gay, lesbian, trans, and straight people should demand equal police treatment from the people who make these police foot patrol dismissals. Our community in “Boystown” and neighboring communities deserves more police protection,not less.Alderman Tunney and the mayor has already been contacted from quite a few people i’ve talked to.