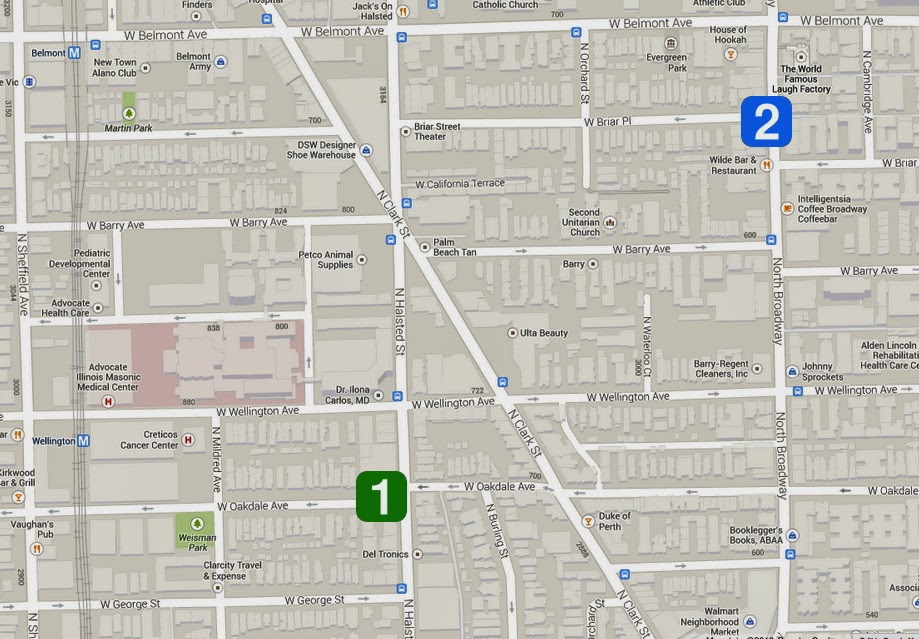 Two women were robbed in separate incidents as the neighborhood awoke this morning.

Many elements of the robberies sound similar to a series of incidents in nearby Lincoln Park and the south end of Lakeview that CWB described in THIS Tuesday report.

First Robbery
In this morning’s first case, a woman on her way to yoga class was strong arm robbed around 5:50AM at Oakdale and Halsted. The offenders grabbed the woman, forced her to the ground, then took her brown Coach purse and iPhone 5. The offenders fled on foot and are believed to have met up with a get-away vehicle.

One offender is described as male, black, young, wearing a skull cap with a bow on top. The other was only described as a young black male in a green coat.

Second Robbery
About an hour after the first robbery, another Lakeview woman was attacked and robbed as she walked one block from her home.

The robbery went down around 7AM at Broadway and Briar. Two offenders fled northbound in a small white 4-door Ford vehicle that was driven by a light-skinned or white female.

The attackers are described as two young black males about 5’6″ tall and of slender builds. One wore a hat and ski jacket.

Also Overnight
Very few details are available in a third robbery that a CTA police unit reported overnight at the Belmont Red Line station. According to the transit police, a man was “robbed at the club” near Belmont and Sheffield around 2:50AM. It is not clear if a 19th district unit made contact with the victim. Case number, if any, TBD.