The city’s Zoning Board of Appeals is generally expected to approve the Broadway Youth Center’s (BYC) request for a variance to continue operating from the Wellington Avenue United Church of Christ.
If you’re interested in a report on the hearing, we recommend (again) Matt Simonette’s coverage at Windy City Times.
On Thursday, 44th Ward Alderman Tom Tunney issued a statement in which he said he would support the BYC variance under three conditions:
An earlier attempt to hash out a Good Neighbor Agreement between BYC and the local South East Lakeview Neighbors (SELVN) community group fell through after SELVN ended negotiations because they believe the GNA to be unenforceable. See SELVN’s abandoned GNA draft HERE.
We have compared Tunney’s proposed GNA with SELVN’s proposal and charted key comparisons below.
Forward
It is not clear if Tunney’s GNA has been executed. Regardless, the ground rules are in place, the community has spoken and expectations have been outlined for BYC’s operation. That’s some good progress considering that, as recently as September, BYC wouldn’t even agree to put their operating hours in writing.
If the center’s neighbors experience problems that are related to BYC’s operation, they will need engage BYC and document incidents so a clear record exists should renewal be sought next year. Also, calling 911 whenever criminal activity is seen will ensure that a formal record is established. Whether the police will available to respond in a timely fashion is a different story.
As for BYC, their biggest challenge may be convincing their staff and volunteers that the monitoring and logs and so much to-do does not stem from a sudden influx of hateful neighbors, but, rather, from the BYC’s own failure to run a neighborhood-friendly operation in the past. The center built an unfavorable reputation in its previous location, with good reason. Now, they have a chance to show everyone that they can do their important work the right way.
We couldn’t help but notice that the first entry in the sample neighborhood monitoring log offered by Ald. Tunney seems a bit flippant, “Baby Hendrik caused a lot more trouble than the byc clients :)”
On the other hand, after a 3:30pm to 6pm monitoring session on November 14, a BYC worker wrote, “it’s getting too dark to walk alone.”
We hear ya, sister. 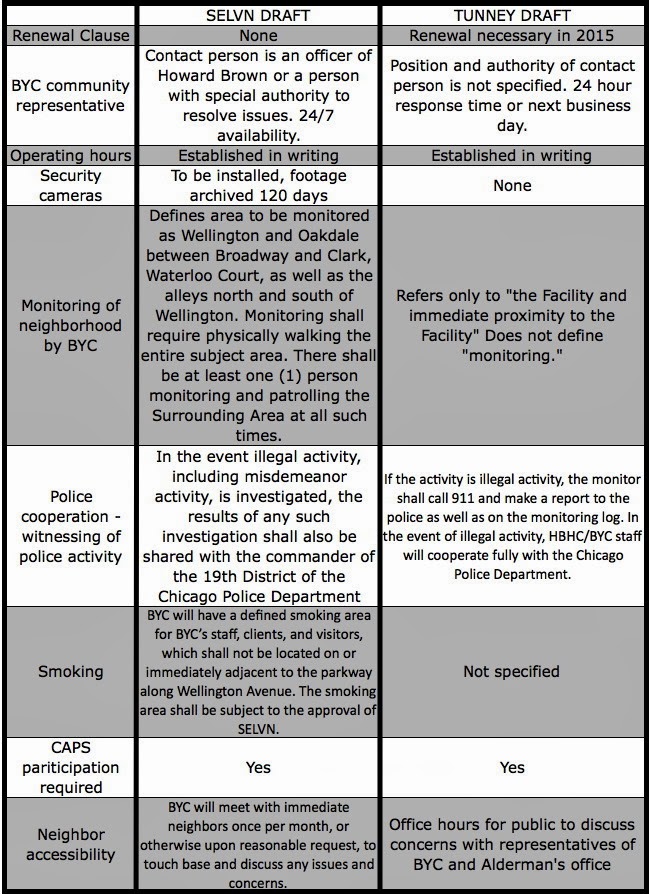 Eye Twister Image Source: Mr Williams
———————
CWB is now on Facebook. Come “Like” us.
———————
About CWBChicago 4363 Articles
CWBChicago was created in 2013 by five residents of Wrigleyville and Boystown who had grown disheartened with inaccurate information that was being provided at local Community Policing (CAPS) meetings. Our coverage area has expanded since then to cover Lincoln Park, River North, The Loop, Uptown, and other North Side Areas. But our mission remains unchanged: To provide original public safety reporting with better context and greater detail than mainstream media outlets.
Website Facebook Twitter YouTube