At least four people were punched by two men in separate incidents Monday.
In the first case, a man was punched in the face for no reason at Sheffield and Waveland around 3:45PM. Officers found the offender, described as male, black, about 19 years old, with a green 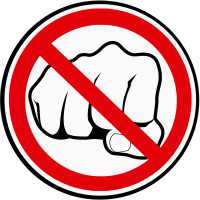 back pack, green jacket, and beige pants, at the Addison Red Line station. He was taken into custody for battery as recorded in CPD case HX121376.

Later, around 8:10PM, an employee at ComedySportz, 929 W. Belmont, reported that an “impaired” man threatened him and pretended to have a gun in his pocket.
Moments later, additional 911 calls reported that a man had punched at least three people under the L tracks at Belmont.
Officers apprehended the offender, described as a black man wearing a black coat with red trim, at Belmont and Sheffield.
He was positively identified by witnesses and is in custody.
Magically Disappearing Crime
How did Chicago tally a mind-boggling 16% drop in crime in just one year?
For one thing, it reduced the number of police officers on the force in some areas—like our district’s 25% manpower cut—thus making fewer officers available to file reports, thereby generating fewer “reported” crimes.
Another excellent crime “reducing” technique that Chicago implemented last year was the decision to no longer dispatch officers to handle certain crimes, forcing victims to sit on hold and file a report over the phone.
One CWB reader saw that second strategy play out on Sunday, January 12:

I was just (about 4:45pm today) in the Walgreens at Broadway & Belmont and heard one side of a conversation between a woman and 911.

Apparently she’d just filled a number of prescriptions, put the bag in her cart, continued to shop and someone stole it out of the cart.

She called 911 and from the sounds of it, they refused to send police to Walgreens and instead told her to call the non-emergency line to file a police report.  Sounds as if–once again–our police shortage is keeping crimes from getting the attention they deserve.

The woman sounded frustrated and distressed, which I can understand if I’d just had a bunch of essential medicines stolen from me.

CWB waited to see if the victim’s theft would be recorded by the city. Guess what? It wasn’t. Score another one for the “crime is down” crew.
———————
CWB is now on Facebook. Come “Like” us.
———————
About CWBChicago 4360 Articles
CWBChicago was created in 2013 by five residents of Wrigleyville and Boystown who had grown disheartened with inaccurate information that was being provided at local Community Policing (CAPS) meetings. Our coverage area has expanded since then to cover Lincoln Park, River North, The Loop, Uptown, and other North Side Areas. But our mission remains unchanged: To provide original public safety reporting with better context and greater detail than mainstream media outlets.
Website Facebook Twitter YouTube