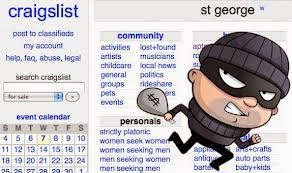 Yet another online sales transaction went south Sunday morning, leaving a couple of victims $1,300 poorer.  The incident has similarities to another theft and a robbery at gunpoint in which victims were lured to the neighborhood by Craiglist deals.
Police met Sunday’s victims in the 1100 block of W. Patterson, just west of Wrigley Field, at 10:15 a.m. A woman told officers that she travelled to Wrigleyville to purchase some electronics from a guy she met online. The man arrived, took her $1,300 and went inside a house to “get the stuff.” He never returned.
On September 21, another woman was relieved of $600 in an identical scam that was carried out in the 600 block of Surf Street. She met the offender on Craigslist.

On October 7, a man was robbed at gunpoint in the 3300 block of N. Kenmore when he met up with a Craigslist advertiser who was supposed to sell him a computer for $1,100 cash. The gunman was described as a Hispanic, 6-feet tall, 200 pounds, with a long pony tail and tattoos.

Sunday morning’s thief is described as Hispanic, 25 to 30 years old, 5’11” tall, 220 pounds, with long, curly black hair. He was wearing a Cubs jacket and light blue blue jeans and went by the name “Angel” or “Anthony.”
Sunday’s incident is logged in CPD case HX111627.
———————
CWB is now on Facebook. Come “Like” us.
———————
Image: Better Business Bureau
About CWBChicago 4360 Articles
CWBChicago was created in 2013 by five residents of Wrigleyville and Boystown who had grown disheartened with inaccurate information that was being provided at local Community Policing (CAPS) meetings. Our coverage area has expanded since then to cover Lincoln Park, River North, The Loop, Uptown, and other North Side Areas. But our mission remains unchanged: To provide original public safety reporting with better context and greater detail than mainstream media outlets.
Website Facebook Twitter YouTube