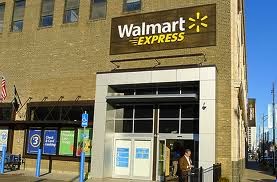 UPDATE: The Walmart Express incident was subsequently downgraded from robbery to “retail theft.”
———
A shoplifting incident spun out of control at the Walmart Express, 3636 N. Broadway, and escalated into a strong arm robbery Sunday. One man was taken into custody.
The Walmart Express incident is the second case in seven days of a routine shoplifting matter turning into a much more serious robbery situation when offenders fought back against store security.
Officers went to the Walmart at 3:25PM Sunday after a 911 call taker said she could hear a loud commotion in the background as store employees called for help.
The incident is recorded in CPD case #HX120348.
45-year-old John Adkisson is facing robbery and aggravated battery charges for biting, kicking, and spitting on a Jewel-Osco seurity guard who tried to stop him for shoplifting vodka last weekend.  Adkisson screamed “I got AIDS” during his failed escape attempt, which contributed to the more severe charges.
———————
CWB is now on Facebook. Come “Like” us.
———————
About CWBChicago 4363 Articles
CWBChicago was created in 2013 by five residents of Wrigleyville and Boystown who had grown disheartened with inaccurate information that was being provided at local Community Policing (CAPS) meetings. Our coverage area has expanded since then to cover Lincoln Park, River North, The Loop, Uptown, and other North Side Areas. But our mission remains unchanged: To provide original public safety reporting with better context and greater detail than mainstream media outlets.
Website Facebook Twitter YouTube