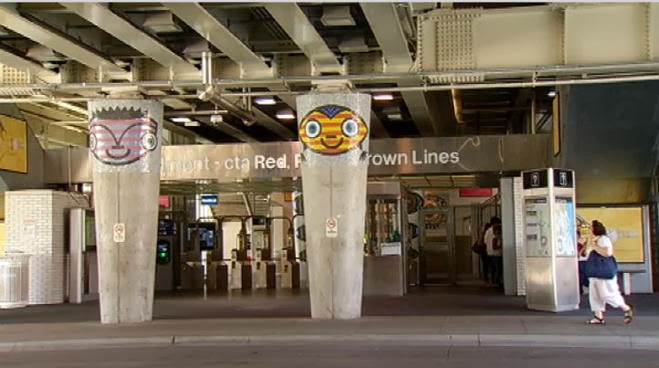 The hits keep coming on Belmont today. After a night in which three incidents led to four people being taken into custody along Belmont, another arrest was made this morning.

911 callers reported a man beating passengers onboard a CTA bus at the Belmont Red Line station around 7:15 this morning. Arriving officers found two or three victims, including a school crossing guard, had been battered by the offender who fled eastbound on Belmont.

A search was launched for the attacker, who is described as male, black, about 20 years old, 5’8″ tall, 170 pounds, sporting a black North Face jacket, blue jeans, and a mouth full of braces.

Officers quickly detained a suspect outside of the Chase bank, 3032 N. Clark, and took him to the CTA station where he was positively identified and arrested.

An ambulance was called to assist one victim who was already sporting a black eye from the attack.

This case is recorded as a simple batter in CPD case HX150598.

Image: NBC Chicago
———————
CWB is now on Facebook. Come “Like” us.
———————
About CWBChicago 4360 Articles
CWBChicago was created in 2013 by five residents of Wrigleyville and Boystown who had grown disheartened with inaccurate information that was being provided at local Community Policing (CAPS) meetings. Our coverage area has expanded since then to cover Lincoln Park, River North, The Loop, Uptown, and other North Side Areas. But our mission remains unchanged: To provide original public safety reporting with better context and greater detail than mainstream media outlets.
Website Facebook Twitter YouTube