A resident in nearby Lake View caught a glimpse of a burglary team in action this afternoon. As CWB has been reporting, more than a dozen neighborhood residences have been broken into over the past ten days, mostly in Wrigleyville. 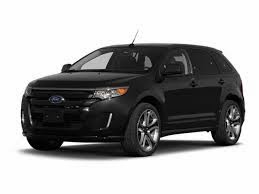 Around 2:45 this afternoon, a witness saw a black, male offender break into a home in the 1400 block of Cornelia. Moments later, the burglar fled with a partner in a black Ford Edge (see image). Case #HX140202.

Last week, a witness saw a man break the front door of a home in the 3700 block of Kenmore at 2:40PM. That burglar was described as a white male with brown hair who was wearing a light colored jacket and blue jeans.

LVCC Meeting
Thursday night’s Lake View Citizens’ Council (LVCC) meeting will include an update from the group’s Crime Task Force. LVCC president Will DeMille says the Task Force portion of the meeting will be “more of a readout of discussions to date and planned next steps.”
6:30PM in the 19th district police station, 850 W. Addison.