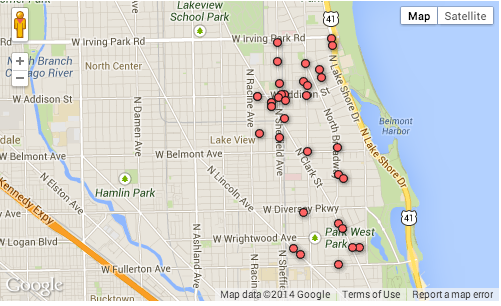 Wrigleyville and Boystown’s street crime problem is most readily seen in two crime statistics: Robbery and battery. Both crimes have increased in our neighborhood while declining by large percentages citywide.

The Chicago Spectrum team has mapped out the year-to-date reported batteries in Wrigleyville and Boystown.

As always, their maps allow you to zoom in to street level and click on individual incidents to see more information.

In legalese, battery is “without lawful authority, intentionally/knowingly makes physical contact of an insulting or provoking nature or causes bodily harm.”

Most of these cases involve causing “bodily harm”to another person.