A teenage boy was beaten up and robbed in the east alley behind the 3400 block of N. Janssen at 4:30 this evening, a witness says, but the boy left the scene before police arrived and no report has been taken. 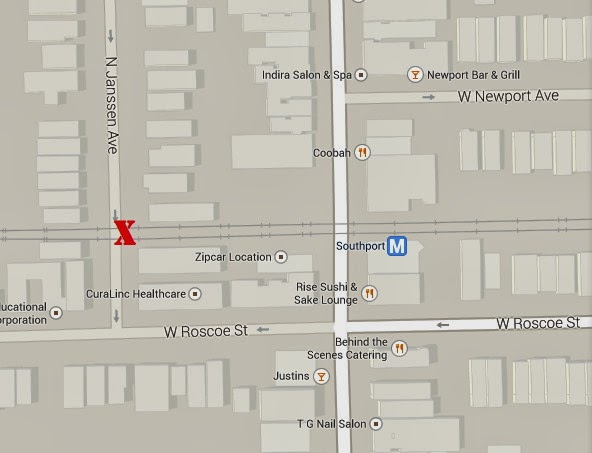 The victim, whose cell phone was taken in the attack, borrowed a passing woman’s phone to dial 911 and report the crime. The victim is describe as male, white, about 13 or 14 years old with braces. He wore a silver jacket.

Officers were on-scene within two minutes of the call’s dispatch, but only the woman remained to speak with them. Until the victim or his parents step forward, the crime cannot be officially recorded by the police department.

UPDATE MARCH 5: A report has been filed. While the report, CPD case #HX164295, places the address of occurrence in the alley behind the 1300 block of Cornelia, the witness encountered the victim at the Janssen location.
———————
CWB is now on Facebook. Come “Like” us.
About CWBChicago 4360 Articles
CWBChicago was created in 2013 by five residents of Wrigleyville and Boystown who had grown disheartened with inaccurate information that was being provided at local Community Policing (CAPS) meetings. Our coverage area has expanded since then to cover Lincoln Park, River North, The Loop, Uptown, and other North Side Areas. But our mission remains unchanged: To provide original public safety reporting with better context and greater detail than mainstream media outlets.
Website Facebook Twitter YouTube