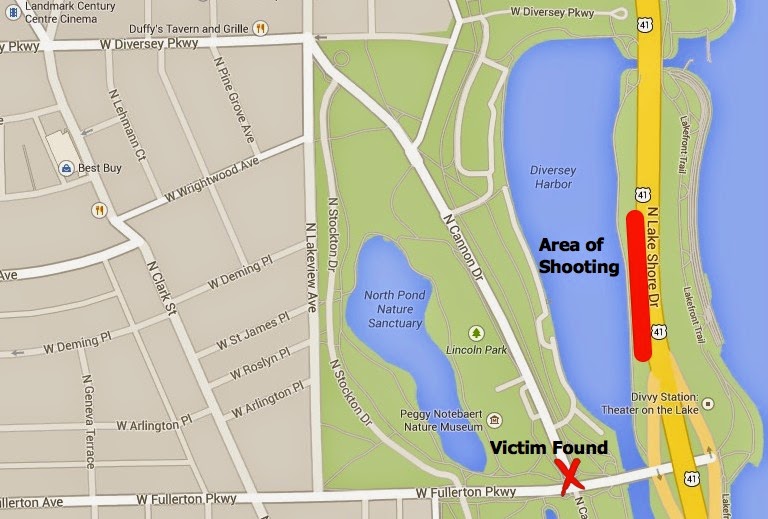 A 24-year-old man was shot in the face as he traveled southbound on Lake Shore Drive between Diversey and Fullerton this morning.

Police responded to the area of Fullerton and Cannon Drive, just north of the Lincoln Park Zoo, at 12:26AM after a woman called 911 to report that her boyfriend had been shot in the face and she needed help getting him to a hospital.

One officer said that a single shell casing was found inside the victim’s van. It is not known if the casing came from the gun used to shoot the man or if it was generated at some other time.

Witnesses provided a vague description of the alleged shooter—a bald man, possibly Hispanic—driving southbound on Lake Shore Drive in a 4-door gray/silver sedan such as a Honda Civic or Nissan Altima.

CPD case HX398763 records the incident as an aggravated battery with a handgun.

Of note, but not definitively connected to the shooting, is a high level of activity early this morning in the 3700 block of Recreation Drive, the area east of Lake Shore Drive just north of Addison. The “Rec Drive” area, particularly a nearby clock tower and lakefront seawall, are well-known gang hang-outs. Two men were shot there in a gang-related incident last month.

911 callers reported drag racing on Recreation Drive about 15 minutes before this morning’s shooting and large crowds were reported and confirmed by police in the Rec Drive area as late as 2:15 this morning.