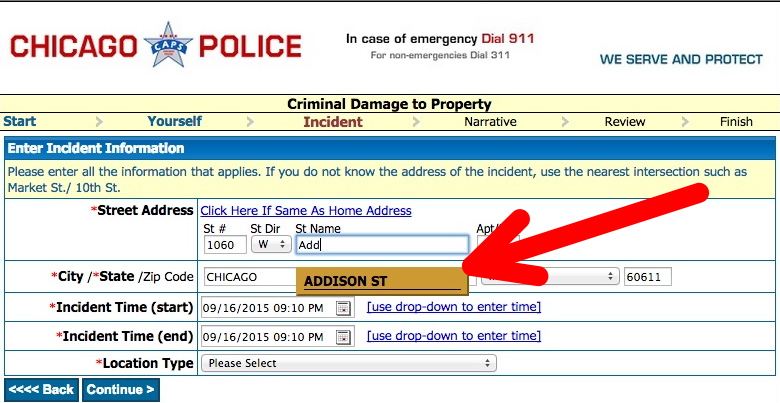 Addresses within the city are now accepted and police reports may be filed online.

Chicago police executives are bragging about an 8% reduction in crime this year (even though murders and other difficult-to-hide crimes have increased).

But part of the crime “reduction” is almost certainly the result of the hurdles that citizens must jump to simply report an incident.

CWB Chicago has now learned that the Chicago Police Department web site that is supposed to allow citizens to file police reports online doesn’t work, adding yet another layer of frustration.

Tipped off by a reader who tried to file a package theft report online this week, CWB editors decided to give it a try. Every time we tried to submit a report, the site told us that the address we entered is not in the CPD’s jurisdiction. We should try calling to file a report over the phone, the site said.

We tried to report criminal damage at 1060 W. Addison. According to the CPD site, that address—the location of Wrigley Field—is not in their jurisdiction.

We tried to report a bicycle theft from outside of the John Hancock Center at 875 N. Michigan Avenue. That’s not in CPD territory, either, the site says.

When the department re-introduced its reporting site last winter, it reassured the public that web-based reporting would be just as good as filing with an officer in person.

The police department pledges that online property crime reporting and anonymous tips are not destined for an electronic black hole. Officials said they will be followed up.

Considering that the department can’t get the front side of the site to function, why should we believe that the backside is working as promised?

More Of The Same

The online crime reporting failure is the newest roadblock that lies between citizens and accurate crime statistics—but it’s hardly the first.

Chicago Police Department policies prohibit the dispatch of police officers to crimes unless someone is injured or an offender is still on-scene. That often means that citizens must sit on hold until an officer becomes available to take their report over the phone.

And, as CWB Chicago reported in February, Chicago had a secret “confidential” classification that prevented some crimes from appearing in the online database that is used by major media outlets to compile statistics.

A Freedom Of Information request for a list of cases that went missing due to the “confidential” classification has been ignored by the Chicago Police Department for nearly seven months.