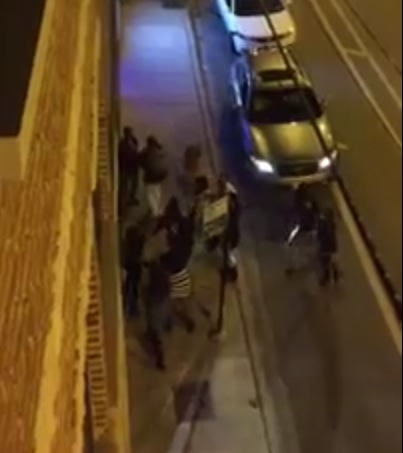 UPDATE: Police made an arrest 25 minutes after the shooting.

The suspect was back on the streets in less than 8 hours.

Video has emerged showing at least five gunshots fired on a busy stretch of Halsted Street in Lincoln Park overnight during a brawl that witnesses said started near a nearby reggae club.

Incredibly, the gunfire played out at the exact moment that the 19th police district was conducting a politically-ordered outdoor roll call of the overnight shift’s officers just three blocks away.

But, when police arrived, officers said they initially could not find a single witness who heard or saw any sort of gunplay.

Calls poured into 911 beginning at 2:04AM to report shots fired in the area of Halsted and Wrightwood. Two of the callers said the gun play began near the Wild Hare nightclub at 2610 N. Halsted.

Video posted moments ago on YouTube shows shots being fired outside of 2622 N Halsted Street.

Yet, incredibly, police said they talked to several people who claimed to have been in the area for “five or ten minutes” and no one had heard or seen anything unusual.

According to 911 callers, the people who were involved in the shooting fled southbound in a gray Infiniti.

Where Were The Cops?

Shots are fired over the course of two minutes in the video, so the question naturally arises: Where were the cops?

The answer is remarkable: All available on-duty officers in the 19th district were supposed to be at a politically-motivated “outdoor roll call” just three blocks away at Sheffield and Diversey.

The 2AM roll call is one in a series of such theatrics that have played out over recent weeks as local aldermen felt pressure from constituents due to rising robbery and other violent crime rates.

Boystown Alderman Tom Tunney and Lincoln Park Alderman Michele Smith, whose office is located one block from the shooting scene, have frequently relied on resource-sapping “outdoor roll calls” to give passers-by the impression that there are a lot of police around.

Many CWB readers have expressed doubt about the wisdom of having all available police officers lined up at a pre-announced specific time and specific place.

And any notion that the “outdoor roll call” PR gimmick is an effective crime deterrent should be neutralized by this video.