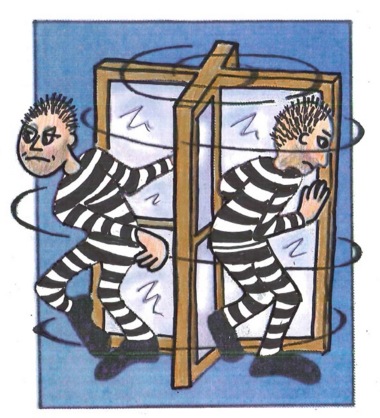 Two convicted felons—one  who’s been sentenced to a combined 60 years in prison since 1982 and the other who is on parole after serving 10 years for armed robbery in Wisconsin—are facing burglary charges for separate incidents in our neighborhood this week, court records show.

In the first case, a resident reported seeing a man dragging a city trash can down an alley in the 1200 and 1300 blocks of W. Belmont and filling it with property from nearby garages and cars around 9 o’clock Wednesday evening.

Cops caught up with career criminal Jerry Cotton nearby and allegedly found property belonging to several people in his possession.

The 53-year-old has been sentenced to a more than 60 years in prison over the past 33 years, yet he manages to keep finding his way out. He’s currently on parole for burglary.

In the second incident, police arrested Bashiek Stovall, 40, after witnesses reported seeing him trying to break into an apartment in the 3700 block of N. Kenmore around 10 o’clock last night.

Stovall—who is supposed to be on active community supervision after being released from a Wisconsin prison where he served 10 years for armed robbery—is charged with theft and criminal trespass to land. He is being held without bond.

Stovall’s previous convictions as a Cheesehead include retail theft, battery, being a felon in possession of a firearm and, as Wisconsin quaintly phrases it, “operating a vehicle without owner’s consent.”

Gentry, charged with reckless conduct, is on parole for burglary in Illinois. Court records show that his prison sentences include:

Despite that, Gentry is free on a recognizance bond.

Rose is charged with disorderly conduct and criminal trespass to land. His bond status is not currently known.

Unsolved burglaries reported in our area over the past few days include: