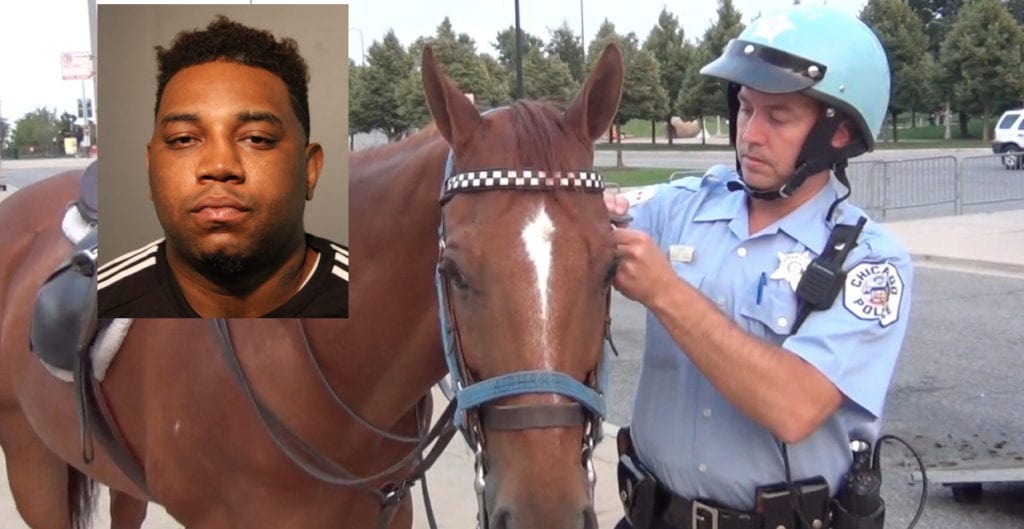 Darius Jackson was at Belmont and Halsted around 12:45AM Monday when he slapped the horse in its face causing the animal to “act erratically and back into a crowd….putting citizens in danger of being stepped on and kicked by the horse,” according to police.

Jackson is hardly the first person to get locked up for messing with CPD horses in our neighborhood.

Three men were arrested after a Foo Fighters concert at Wrigley Field last August, accused of slapping a police horse named “Airhart.” A suburban firefighter who “played drums” on the horse’s hindquarter was joined in jail by an attorney and a third man.

Image of police horse: Paulick Report
———-
Email us. Facebook us. Twitter us.
About CWBChicago 4363 Articles
CWBChicago was created in 2013 by five residents of Wrigleyville and Boystown who had grown disheartened with inaccurate information that was being provided at local Community Policing (CAPS) meetings. Our coverage area has expanded since then to cover Lincoln Park, River North, The Loop, Uptown, and other North Side Areas. But our mission remains unchanged: To provide original public safety reporting with better context and greater detail than mainstream media outlets.
Website Facebook Twitter YouTube