This is Part Two of a three-part series on the relationship between policing and private security patrols in Wrigleyville and Boystown. See Part One HERE.  Part Three HERE.  And Sidebar HERE.

A local cop whose side business provides security for the Center on Halsted and private patrols to Boystown’s bar strip is fighting a 60-day suspension from the Chicago Police Department after he allegedly tossed a black bouncer to the floor of a Boystown bar amid a torrent of racial epithets, according to city records.

The allegations against 19th District community policing officer Thomas J. Walsh were sustained after a 15-month investigation by the Independent Police Review Authority (IPRA), records show. Only a claim that Walsh was drunk at the time was not sustained, IPRA said.

And a civil case against Walsh—alleging hate crime, battery and more—continues to wind its way through the system, with parties due back in court on Friday.

The allegations against Walsh were discovered by CWBChicago editors as we developed a story about private security services in Lakeview. We reviewed more than 450 pages of documents from the Chicago Police Department, IPRA, and the Cook County Court Clerk for this report.

On the day after Thanksgiving 2013, Walsh and some friends went to dinner at a West Town Italian restaurant and split a bottle of wine, he would later tell IPRA investigator William Abbruzzese. 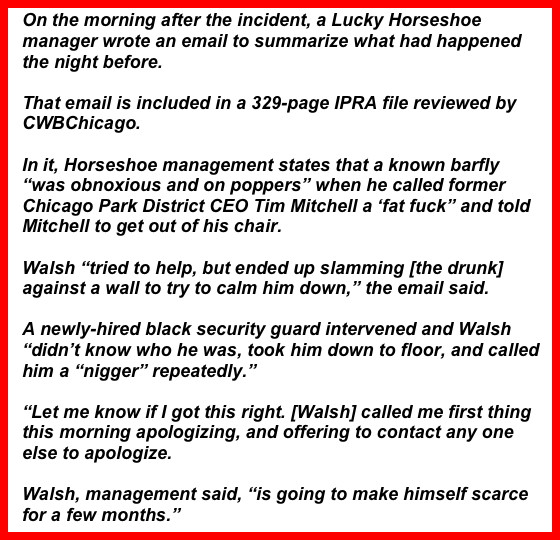 Around 9:30 p.m., Walsh headed to the Lucky Horseshoe, a bar at 3169 North Halsted in Boystown, where he had been friends with management for some 15 years.

He bellied up to the back bar with Tim Mitchell, a politically-connected man who was ex-CEO of the Chicago Park District and a long-time aide to Chicago Mayor Richard M. Daley.

A few minutes later, James Matthews, then 48-years-old, walked through the bar’s front door. He was reporting for his first shift as a security officer there.

Matthews was met by his supervisor who walked him through the bar, showing him the layout and introducing him to staff members.

As the two guards reached the back bar, they noticed a dust-up between some patrons.

“They were in each other’s faces,” the supervisor later told investigators, “and I noticed one of the gentlemen involved was Tom Walsh.”

A local barfly had been thrown to the ground after calling Walsh’s friend—Mitchell—a “fat fuck.” Walsh said he was trying to break up the fight when security arrived.

The security supervisor—knowing Walsh to be an off-duty cop who privately patrols Halsted Street—”felt it’d be best if [Walsh] knew the new guy [Matthews],” so he introduced them. They shook hands and Matthews assumed his post at the rear entrance.

A few minutes later, Matthews saw another incident in the back bar. 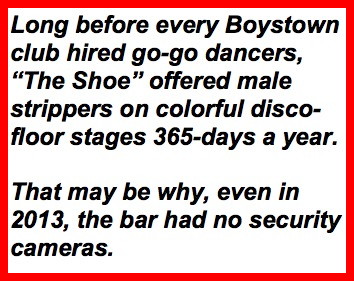 Walsh was “punchin’ ‘nother patron in the face. I separate them and…Mr. Walsh attacked me and knocked me down on my right side,” Matthews later told investigators.

Matthews’ supervisor didn’t see what caused his new guard to fall, but “Lo and behold, he’s on the floor, and Mr. Walsh is standing above him screaming — insane,” the supervisor recalled in an IPRA report. “He repeatedly called him the ’N’ word, a — a n*gger.”

“Mr. Walsh… comes charging, almost as if to finish him off. I’m helping [Matthews] stand up. And a bunch of [Walsh’s| friends grab him, and he’s just raving and, you know, telling [the injured guard] what he thinks of him and all that good stuff.”

Saying the incident seemed like a scene from The Jerry Springer Show, the supervisor said Walsh “looked directly at me and spoke directly to me and said ‘get that fucking n*gger away from me.’”

A bartender also told IPRA that Walsh was involved in a fist fight. He even stepped away from his post “to get somebody to help—to break them up or to calm them down,” he said.

The bartender, whose name is redacted in IPRA’s report, said Matthews seemed to grab Walsh by the shoulders to pull him back from the confrontation.

“It happened so quick and [the new guard] was on the ground….He just was like ‘my back…or my shoulders and my back.’”

Investigators heard a different story from Walsh: The intoxicated patron who had called his friend a name minutes earlier started hitting Walsh in the chest, the officer recalled.

“That’s when I get up and I said—I didn’t strike ‘em or anything—I said keep your hands off me. I said that hurts,” Walsh recalled.

“And with that, someone comes from behind me. They put their arm around my neck,” Walsh said. “I just turned with my body…and shrugged him off. Whoever it was. Never put my hands on ‘em. Never pushed ‘em.”

The person Walsh says he shrugged off was the guard—Matthews—who was about four inches taller and 40 pounds heavier than Walsh, according to IPRA case files.

“…and then you know the guy’s layin’ on the ground. And I said what the fuck are you puttin’ your hands on me? And I… did call ‘em a n*gger which I regret,” Walsh told investigators.

Three days after Walsh met with IPRA’s Abbruzzese, the men returned to the agency’s offices on Chicago Avenue. Walsh wanted to make some clarifications.

Walsh went on to say that he referred to a white man as “n*gger” during the episode, too. “It was just not meant to be a racial slur.”

“I wanted to clarify that my conduct was not influenced by the alcohol… I was not intoxicated. I did not start either event and I was assaulted from the rear by an unidentified individual.”

IPRA’s Abbruzzese later wrote that “Officer Walsh’s attempted justification of his use of profanity and racially derogatory language is not only egregious but blatantly fictitious.”

Two of Walsh’s acquaintances also spoke with IPRA investigators about the incident. Both stated that Matthews put Walsh in a “chokehold.”

Neither man could recall seeing Matthews on the floor nor did they remember Walsh verbally abusing him as he lay on the ground. One recalled Walsh using the N-word.

Mitchell, the former parks CEO who was the target of the drunk’s insults, died in December 2014.

On March 18, 2015, the agency sustained three of the four charges against Walsh.

Walsh had “engaged in an unjustified physical altercation when he pushed [Matthews] to the floor, causing an injury to his right shoulder,” investigator Abbruzzese wrote.

Walsh had also violated department rules “when he stated words to the effect of ‘Fucking n*gger. Don’t you ever put your fucking hands on me,’ ‘Who the fuck do you think you are, you fucking n*gger,’ and ‘Get that fucking n*gger away from me,’” IPRA’s findings said.

The agency also sustained an allegation that Walsh’s actions at the Horseshoe brought discredit upon the department.

Only an allegation that Walsh was intoxicated at the time of the incident was not sustained, meaning that investigators found insufficient evidence to either prove or disprove the claim.

Walsh immediately exercised his contractual right to file a grievance and the matter is now working its way though that often years-long process.

The suit accuses Walsh of a hate crime, battery, and intentional infliction of emotional distress.

Matthews claims he has not been able to work as a security officer since the night of the incident due to a torn rotator cuff and severe pain.

Depositions in the suit began late last year, and the case is scheduled for trial in early 2018.

In preparing our report, CWBChicago editors asked Center on Halsted CEO Modesto “Tico” Valle for comment on this story. The Center pays Walsh’s security firm over $130,000 a year for guard services.

Valle stated that someone told him the case is still under investigation and “there is nothing to comment on.”

Valle did not respond when we informed him that IPRA concluded its investigation two years ago.