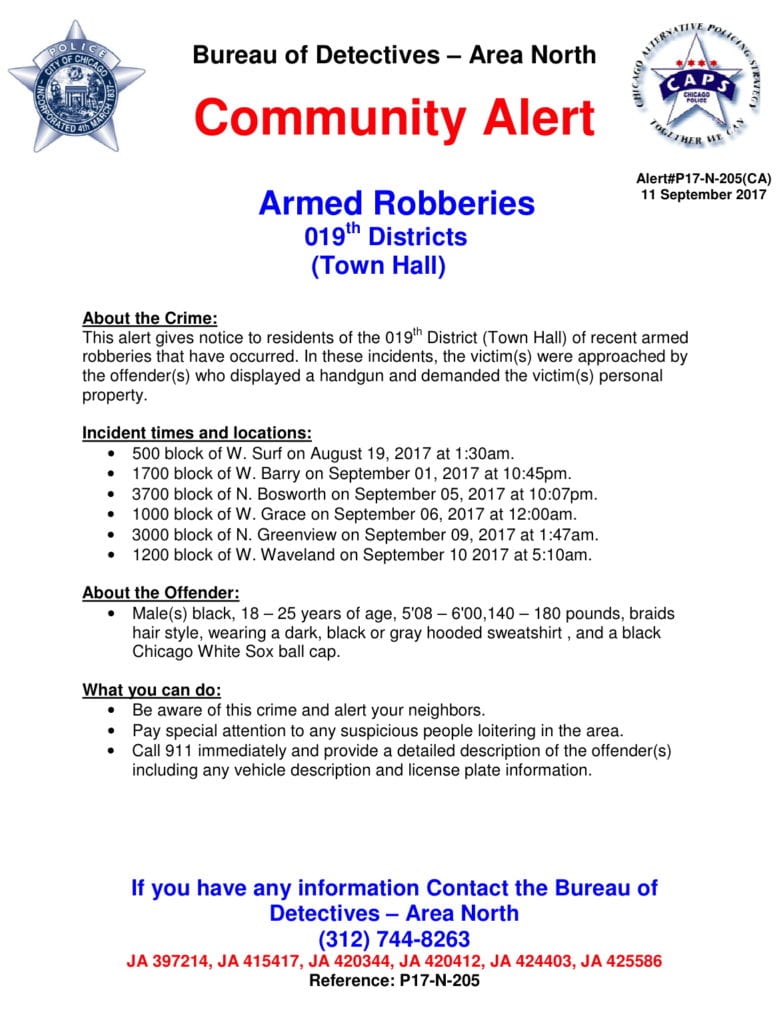 Detectives last night issued a separate warning about a series of armed robberies in the Lakeview area. Another robbery crew, also working the North Side, was profiled in a different police warning last week.

The new alert follows two muggings in Wrigleyville and nearby Lakeview on Sunday and Monday:

• Two people sought help at the fire station outside of Wrigley Field after being robbed around 5:10 a.m. on Sunday, The victims were in the 1200 block of West Waveland when two offenders approached them, displayed a handgun, and demanded valuables. The robbers were last seen running southbound on Racine. This robbery is included in the police alert.

• Not included in the alert is the robbery of a woman in the 600 block of West Belmont around 12:30 a.m. on Monday. The victim was jumped and robbed of her purse by an offender who was last seen jumping a fence near Orchard and Briar. He is described as a black, 5’6” tall, and wearing a red flannel shirt with blue jeans.

In the alert released last night, police describe a pattern of robberies in which one or two offenders approach victims on the street and take property at gunpoint. Police said the suspects are black men between 18- and 25-years-old; 5’8” to 6-feet tall; 140-180 pounds with braided hair. One man often wears a black Chicago White Sox hat.

The alert mentions six specific crimes. (Click on each for CWBChicago’s original reporting on the case.)

Anyone with information about the crimes is asked to call Area North investigators at (312) 744-8263.